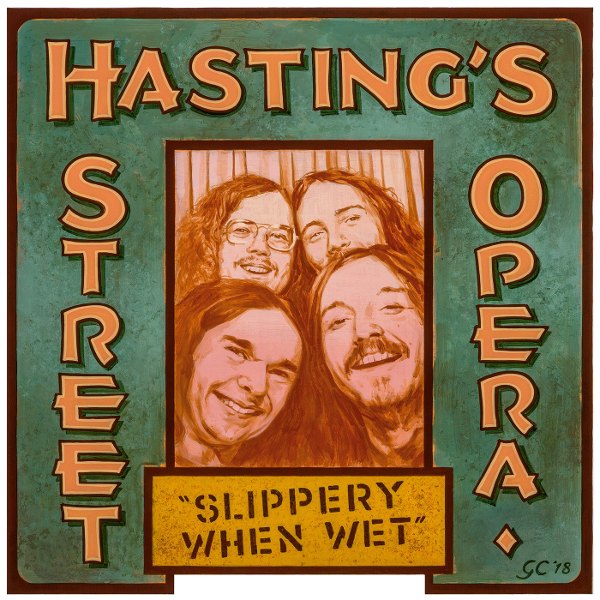 In the late 60s a group of young friends (Harry Wellott, Gordon Carlisle, Don Hathaway, and Chris Nelson) in Montclair, NJ formed the Hasting’s Street Opera, named after an old Detroit blues LP. In the late 60s the underground FM stations out of New York, WNEW-FM and WABC-FM (later renamed WPLJ), would play commercial free blues, blues rock, folk rock, psychedelic rock, etc. that greatly influenced the band: Blues Project, Butterfield Blues Band, Miles Davis, Pharaoh Sanders, Jethro Tull, and so on. Hasting’s Street Opera began as a blues band that evolved to an improvisational group. In 1969 they recorded their one and done vanity press album Slippery When Wet at Don’s house using a portable tape recorder operated by their math teacher, who also happened to be the old-time music preserver Charles Faurot. The album was a limited run of 100 copies housed in handmade covers. The recording was straight to tape with no overdubs and is a mixture of original tunes and three covers: “Summertime,” “Scarborough Fair,” and “A Taste of Honey.” Since master tapes were lost over the decades, this first ever reissue was sourced from a mint vinyl copy. Given the technology in the late 60s, the sound is lo-fi, but that does not detract from the music. The album opens with the strong psych jam “Nobody Knows,” with an extended drum solo lasting about 3 ½ minutes! This track is followed by “Fool-August,” a delicate acoustic guitar / flute duet that morphs into progressive jazz. At this point I did not know what to expect for “Scarborough Fair,” especially since this track is 6 ½ minutes long. The instrumental leads off with the flute playing the melody, but the phrasing is a bit off and all of a sudden the band kicks in and starts riffing on the melody for a creative and enjoyable folk rock jazz improvisation, culminating in a return to the melody line. Next is a 20 second playful recording of the band being silly “Lo-De-Lo.” Now we are treated to another original track, “Peach,” that is heavily influenced by Jethro Tull, and you may remember that in the late 60s Jethro Tull was more jazz oriented than progressive. Those of us who grew up in the 60s will probably remember Herb Alpert’s pop hit “A Taste of Honey.” Hasting’s Street Opera took this tune and made it their own as a progressive jazz track. “Think of Me,” another original track, is a tasty jazz tune built around a piano riff. And the album closes with a fantastic instrumental based on Gershwin’s “Summertime” from Porgy and Bess, launching into a wonderful jam lasting almost 14 minutes. The information is a bit sparse about Hasting’s Street Opera, but reading between the lines, I surmise that they were either in high school or in their early college years when they recorded this album. They were extremely talented and it is a crying shame that they never went any further. Kudos to Guerssen for unearthing this jem from the 60s.