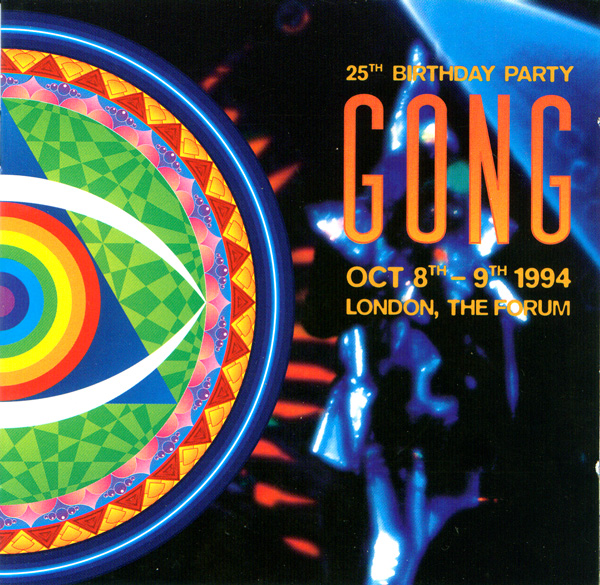 Just what the world needs, another live album by Gong!?! On some terms The Birthday Party can be compared to the live albums released by their conceptually inferior contemporaries, Hawkwind, for managing to continue to release live recordings from current mock line-ups for posterity and the prime governing factor: cash! But before I jump the wagon here, let me state, I actually like this two CD release from the Gong Appreciation Society. It’s well recorded, sounds pretty good and the members are well rehearsed. The band is in fine form for a re-union: I mean we can take Pip Pyle over Pierre Moerlin, Steve Hillage is also sadly absent as well. But present and welcome additions back to (at least) this planet, are Mike Howlett ( very solid bass playing throughout the shows) and Tim Blake’s role ( in particular on the outstanding track, "Clouds Again") show a good glimpse of the jazzy/spacey elements where the group excelled. Disc One is classic Gong, Allen/Smyth going through the now, somewhat familiar Gong song cycle at an even pace. Disc Two: I don’t know much of this stuff, er... Maybe I do. I think it’s mislabeled: "Isle of Everywhere" is "Tri-cycle Gliss." Live photos from the insert look very similar to those included in the best album by the band, Gong Live Etc: the real watermark. And this set holds up pretty well to it (unlike the previous, full band re-union which did include Moerlen and Hillage by the way!). Some of this starts to blur into the Ozrics territory, but at least there is definite pacing by the songs and you can tell the difference between the beginning and ending of the disc. This would have been a fun show to attend