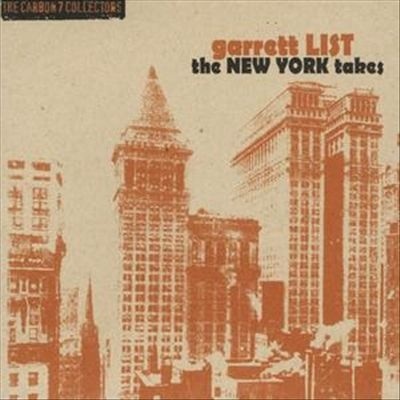 You may be aware of Carbon 7 for their new Present release (No. 6), Cro-Magnon, and a few others. But with Garrett List we and they step into a different dimension altogether. The New York Takes is one wild ride. Vocal songs form the basis of the recording, sung in a bluesy or soul music-inflected idiom (by both male and female singers) that is — as you probably would guess — not my forte! But it is in the backup music where things really go “out there” so to speak. Instead of the typical and simple strains of funky musical backing one would expect, what List leads is an all-star improvisation-hungry jazz/avant garde assembly; a sort of small big band (if you’ll pardon the oxymoron), whose most famous member is drummer Ronald Shannon Jackson. Everyone here, especially sax and drums, tear it up over the course of the CD, covering bases that include everything from amorphous textural chamber collages, to free-wheeling jazz interplay, to skewed popular sounds like blues and R&B—all well outside the normal jazz boundaries. The delivery is impeccable, done to almost big band proportions at one end, but with an acute sensitivity to lighter sides of delicacy as well. List is a master in shaping and forming his orchestration, how he uses extemporaneous musical substance to create the illusion of strict composition is formidable. And all the members deserve credit for serving these ends splendidly. The vocal styles are not up my alley, and while List’s work is really not Exposé territory, I know professionalism when I hear it.