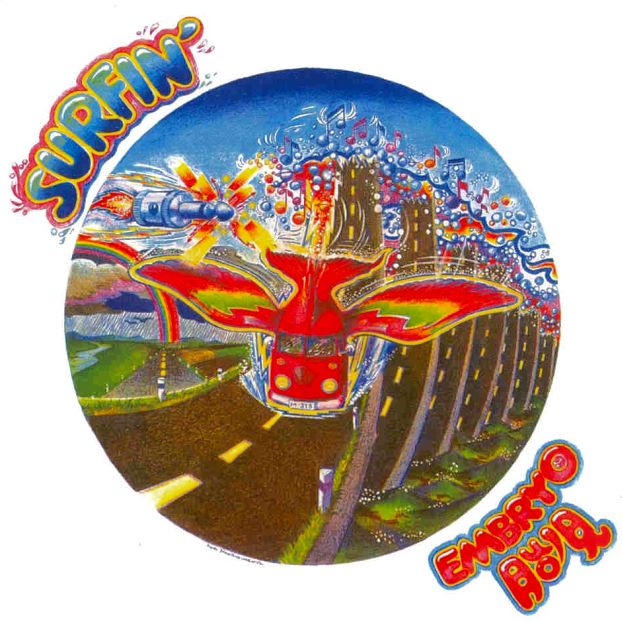 Embryo is one of the seminal German bands from the 60s that have continued to record and perform. Surfin', released in 1975, was their seventh album. Their earlier albums featured ground-breaking free-riffing jazz fusion and Surfin' was an attempt to be more commercial. The title refers to traveling from gig to gig, not surfing. However, it was not a success, as fans did not appreciate the funk and soul elements. The eight songs on the album are a mixture of funky jazzrock, fusion, and krautrock with some outstanding extended passages. The weakest point is Christian Burchard's voice, which detracts from the music. The band, Christian Burchard, Uwe Müllrich, Roman Bunka, Charlie Mariano, and Edgar Hofmann play a mixture of traditional jazz instruments (percussion, vibes, guitars, bass, keys, sax, and violins)along with Eastern instruments (sitar, saz, nagasaram, etc.). This concoction works remarkably well. "New Ridin'" is a funky bass and guitar track that totally surprises you when Bunka's non-traditional and funky sitar jumps into the mix. On "Dance of Some Broken Glass," the longest at 9 minutes, you hear beginnings of the eastern music influence that Embryo would later embrace. The one slightly oddball track is the short "In My Lunamatic" as it is an amorphous drum and percussion track with some guitar strumming. Overall, despite the lack its commercial success, Surfin' is an excellent release, especially if you like a funky beat. We are indeed fortunate that Garden of Delights reissued this album.