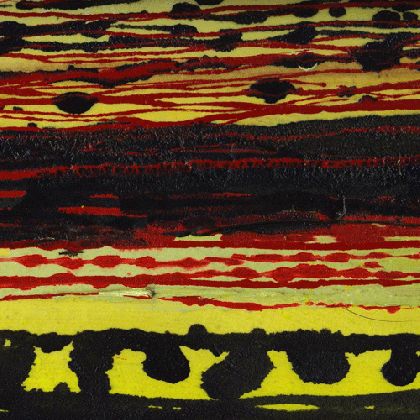 During the Legendary Pink Dots 2008 tour they were selling Edward’s The Painted River of Regrets as a limited edition of 399 CDr copies. These were rapidly sold out and Beta-lactam Ring Records elected to reissue the music as a 180 gram vinyl limited edition of 500 copies. The vinyl comes in a full color book bound sleeve to preserve the quality of the record. The music is one long piece divided into two parts, one per side. This is Edward Ka-Spel at his most experimental. There are no waltzes or other song structures here. Instead, we have an instrumental soundtrack to an imaginary film that Edward worked on for over a year. This must be an outré and scary psychological movie, as the music flows from quiet ambient sections with the smallest of sounds to dissonant structures and heavily processed sonic sources. This is sad and contemplative music, much akin to Brian Eno’s Thursday Afternoon. When you consider Edward’s body of work, it breaks down into two basic categories: songs and poetry similar to the Legendary Pink Dots catalog, and avant-garde sonic experimentations. The Painted River of Regrets definitely falls into the second category, so I would caution any fan that is not used to Edward’s experimental and dark side to approach this release with caution. Though it is an excellent composition and addition to his catalog, it may not appeal to everyone.