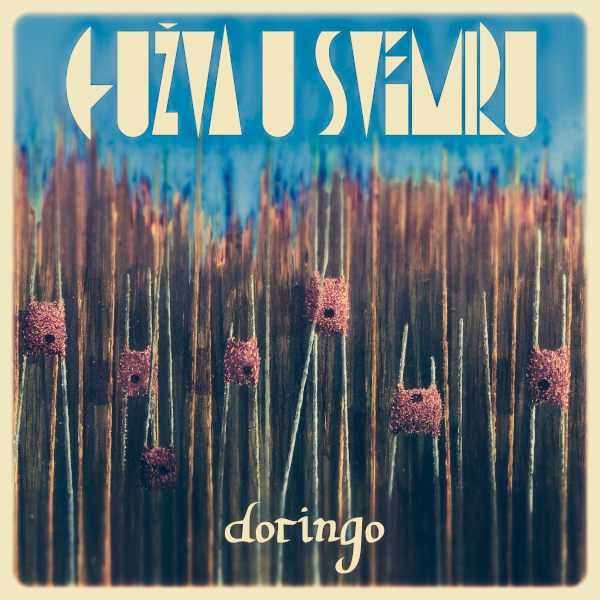 An instrumental trio from Zagreb, Croatia, Doringo is both the name of the guitarist and the band (he’s also a photographer, video and audio engineer), and for their second full album Gužva u Svemiru is joined by drummer Damir Mihaljević and bassist Mihovil Jurdana for eight tracks of what could best be described as progressive surf rock informed by a Balkan folky flavor. In addition, numerous guest players appear on the album offering saxes, bass clarinet, violin and acoustic guitar, track depending. Half of the cuts were released as singles between 2018-19, but here you get them all plus four new ones, all serving as a great introduction to the band. The intense rapid-fire opener “Mrežničko Kolo” with its sax accompaniment sets the stage for all that follows, with a twisted groove that grows and collapses several times during the song’s four minute duration. “Vrlika” opens with an elaborate guitar figure amid a shifting rhythm, until the full band turns it into a power groove with violinist Lucija Stanojević contributing some brilliant melodies and coloration over its five minute duration. Strong folk elements inform the intensely progressive “Enofazni Števec” with quirky rhythms and repeating guitar figures reminiscent of things the California Guitar Trio might tackle, but Jurdana turns in a monster bass solo over it all. “Privid Zajedništva” pushes a funky bottom through, offering a vehicle for solo conversations by bass clarinetist Aldo Foško and Doringo on guitar. The real surf twang comes in with “Kineska Močvara,” yet the melody could only be something from Eastern Europe. Sweet guitar picking opens the four minute closer “Blue House,” with bass and drums joining in the fun only moments later, with Mihaljević taking his drum solo during a short break in the middle of the tune. This is an album filled with many exciting moments, sure to spark the imagination of guitar players everywhere.