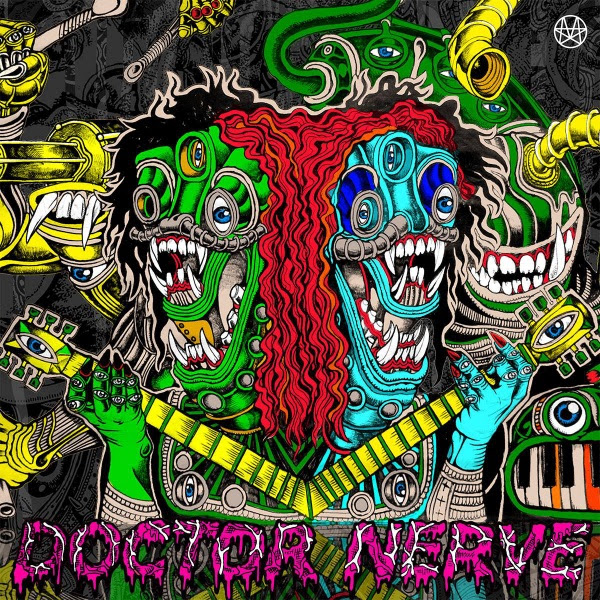 Loud indeed, but tasty and inventive as well I might add. Doctor Nerve is a musical monster like no other, and even though it’s been around ten years since their last release, they have only gotten tighter with age. Essentially a mash up of a complex instrumental metal trio with a four piece horn section and one piano tying things together, here they play four blistering hot tunes and take no prisoners. Find the video of the opening track “If You Were Me, Right Now I’d Be Dead” for a potent whallop of what these eight musicians can deliver, all led by composer / guitarist Nick Didkovsky, who in addition to leading Doctor Nerve has his hands in numerous other projects that we have covered regularly in these pages. The four tracks of the Loud vinyl release are a mere seventeen minutes, basically a four song EP, but it won’t take more than seventeen seconds of any one of these cuts to make it perfectly clear why it has that title! “Painting with Bullets” is a particularly effective piece for the horn section and a killer guitar solo, while “Meta 04” has probably the most complex rhythmic figure here, and closer “Uses Probe Form” delivers even more madness over its near six minute duration. The CD release includes a lot more including five versions of a sub-ten second cut titled “Meta 01.A,” through “Meta 01.E” (those used to be called “Nerve Events”) plus several bonus versions of the main four main tunes, where Didkovsky offers a number of other guitarists a chance to solo (They are the same basic tracks, only a punch in and punch out for the duration of the solo, repacing Didkovsky’s original), the guests include Kevin Hufnagel, Henry Kaiser, Mike Keneally, René Lussier, Matt Hollenberg, Andrew Hawkins, Robert Musso, and Shawn Persinger is Prester John. A whole lotta crazy fun, but the bonus versions stand every bit as strong as the first four. And your ears will ring!