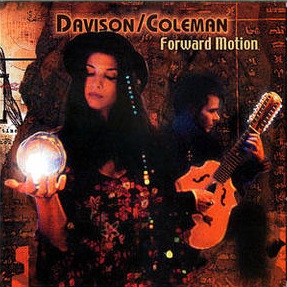 The folk-based singer-songwriter genre (if that’s what you want to call it) is in some ways the most basic form of music there is: a person devises music and then performs it all on their own. In its modern incarnation, the format presents certain dangers, most notably the tendency toward a certain precious earnestness, but also the virtue of directness. Davison/Coleman, as you can tell by the name, is not strictly singer-songwriter territory, being a duo, but they very much fit the mold. Lynn Davison’s voice reminds me a lot of various other contemporary singers along the lines of Dar Williams or Shawn Colvin, but not in a way that seems to be deliberate imitation. Cole Coleman’s voice is pleasant if not distinctive, and blends nicely with hers. The arrangements are quite lovely, featuring nice use of strings and keyboards, but no drums or percussion. The playing, especially on the laud, Coleman’s main instrument, is lively enough to keep it from getting snoozeworthy. The laud is a bit like an oversized 12-string mandolin, and has a bright sound that is both refined and earthy. Most of the songs feature many layers, both of backing vocals and various instruments. And perhaps they venture near that danger zone of precious earnestness from time to time, but to my ear never past it. Overall, it’s quite a nice album, and a good choice for lazy weekend afternoon listening.

The Hook - Hooked – One of the best parts of picking up modern reissues of obscurities from the 60s is that so many of them have interesting liner notes detailing the near-misses and might-have-beens of that distant...  (2005) » Read more

The Devil Is in the Popups