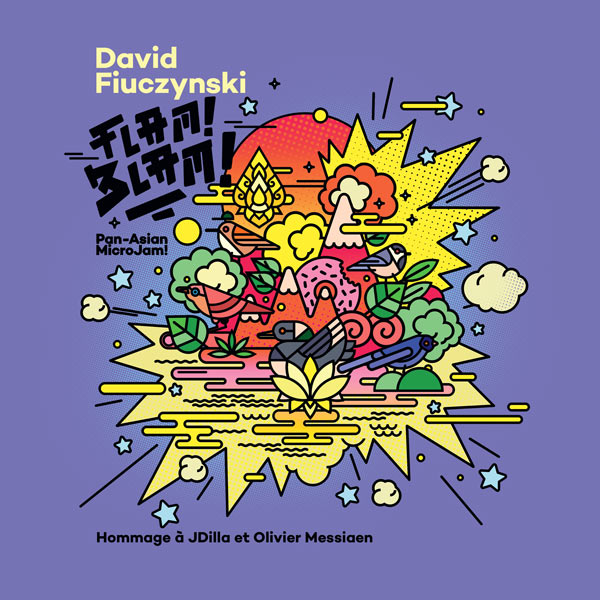 Guitarist David Fiuczynski is probably best known for his acrobatic, highly technical playing, but this release finds him in very different territory. The “Microjam” part of the title refers to the prominence of microtones in this music, with Fiuczynski playing fretless guitar, Jack Sherman using “microtonal keyboard” (which often sounds like an oddly-tuned Rhodes electric piano), and a variety of instruments capable of executing the pitches between the notes of equal-tempered scales: violin, suona (a Chinese double-reed instrument), and percussion. The other element that features prominently in the arrangements is birdsong, with recordings of quite a few different species making appearances. Thus, a title like “Loon-y Tunes” is literally accurate and does not refer to classic cartoons. Other factors are composer Olivier Messaien, who was known to have been inspired by birdsong, and the rhythmic style of hip-hop producer James “JDilla” Yancy. If you’re guessing at this point that Flam! Is fairly distant from mainstream jazz or rock, you are quite correct. There are a few tracks that lean a bit more to the jazz side, such as “Uira Happy Jam,” which features a drum kit and guest Rudresh Mahanthappa on alto sax, though no one would ever mistake it for a George Benson tune. The way mallet instruments are used often brings to mind gamelan music, but this is truly like nothing I’ve ever heard before. Fiuczynski released an earlier “microjam” album in 2012, but I missed it when it came out. Among other things, Flam! provides a working model for one way to successfully use microtones in music that’s not wholly alien to Western ears. It’s also a blending of Western styles with music from other parts of the world that doesn’t shoehorn the subtleties of non-even-tempered scales into even-tempering in order to appeal to Western ears and be easily playable on standard instruments. It’s a fascinating and enjoyable listen from start to finish, and should continue to reveal new details for many repeats to come.