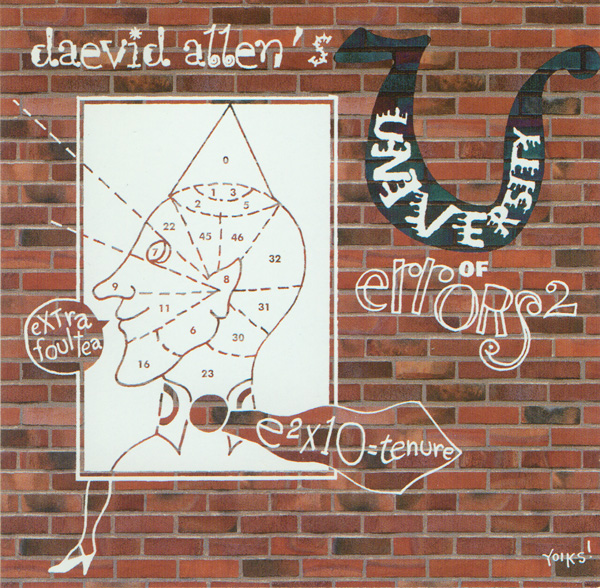 This sophomore CD from University of Errors starts with “Iced Tea Overture” and gets your attention with a chunky beat, free-form guitar, and spaced out effects. Then Allen gets going on his typical vocal strangeness, offering up a collection of songs that probably won’t surprise anyone familiar with his previous work. Hypnotic riffs backed by effects-heavy guitar provide settings for Allen’s poetic ramblings. Occasionally his silliness gets a little out of hand, but that’s one of the things his fans love him for. In general, I find the shorter pieces more satisfying, like “Olde Guitar Body of Mine” or “Pinky’s Party Song,” which rocks hard behind funny, raunchy lyrics (“It’s not the size of the surprise, it’s the motion of the ocean”). The seven minute story called “Innesfree,” enunciated in a goofy accent, is pretty amusing, at least the first time. There are also a couple of great guitar solos sprinkled through the proceedings. All in all, this is another worthy addition to Allen’s oevre, and if you like Allen-era Gong or his other work, you’ll appreciate this one too. “Good evening, Captain Marvel and Superman, but particularly Captain Marvel. Shazam!”