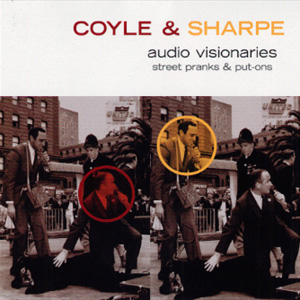 Radical radio had its fruition in the sixties where Mal Sharpe and Jim Coyle had a format of witticism and enlightenment. The duo had worked on local KGO radio and branched out onto the street (literally) by inventing Ernie Kovacs like skits to see how the average Joe would take it. The subject matter for 1963 is very Zappa-esque circa Flo-and-Eddie phase or any such shtick where the absurd becomes the norm. Some of the duo’s concepts such as on “Three-ism” where three people fuse their personality on a theoretically personal basis. Or “Maniacs in Living Hell” where a bystander takes a job handling crazy people surrounded by flames and bats. He premise is completely absurd as well as amusing. It’s pretty hard to keep a straight face listening to these goofballs on “Saranac My Day” where the two shred foreign accents. At length the two can befuddle the people they interview making it seem like some warped extract from The Twilight Zone. Fans include Henry Rollins and Ken Goldsmith endorsing the project as part of the Whitney Museum’s sound works exhibit. And the there’s the fake ad for The National Pore Society which most certainly had a few eyebrows raised. “KGO Jingles” is a silly attempt singing the stations call letters while a confused interviewee has no clue about the in-joke. Overall the disc chronicles a by-gone era which previews and mirrors modern mood and thought.