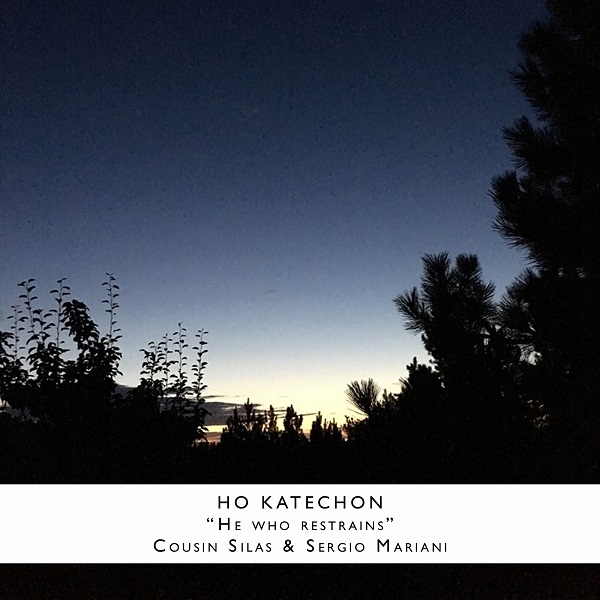 The album at hand is an expansive floating ambient panoramic soundscape that calms the nerves and soothes the spirit, a perfect coupling between the busy world of consciousness and the relaxed meditative state that leads to slumber. Cousin Silas is the working name of prolific UK based ambient artist Dave Hughes, who has released nearly two hundred recordings (solo and in collaboration) since his 2001 debut, Liliput, most of those CDRs or download only, fourteen in 2018 alone. I have heard exactly zero of his earlier recordings, but given the titles they bear I would expect nothing but the best floating ambient sounds and dronescapes, as many of them are titled. Iowa-based Sergio Mariani has a completely different back story, with only one previous release from 2015 titled Secret Place, it was a more varied recording, eleven tracks exploring many avenues of electronic-based sounds, some with vocals, some featuring bouncy synth tracks, or, in a word, very unlike Ho Katechon. The five movements of “Ho Katechon” (“Quiescence,” “Part 1,” “Part 2,” “Part 3,” and “Concluding”) span over 70 minutes, a dreamy peaceful introspective journey of mostly slow-evolving synth textures with some occasional appearances of stringed instruments (guitar, zither possibly, everything being heavily processed throughout). There is no cadence, no beat, no sharp edge of any kind; the five pieces just drift slowly and beautifully from one idea to the next, in a completely immersive experience that enriches ones spirit while traveling down the great spiral into subconscious states.