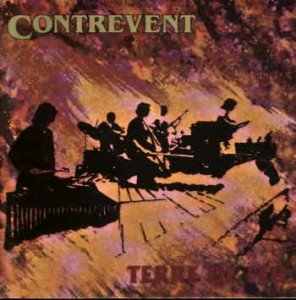 Canadian fusion at its smokin' best, Contrevent are a five piece of drums, bass, guitar, cello, and vibraphone/keyboards. Their style is energetic and complex, yet very accessible. One might be reminded of Maneige, Dixie Dregs, and mid-period Pat Metheny Group all rolled into one. Plenty of dramatic suspense, counterpoint, dynamics, and a certain amount of dissonance come into play in their compositions, all supplied by either guitarist Marl Vallée or cellist Eric Longsworth. Solos are provided by vibes, cello, or sometimes both in tandem, while the other provides support over a snappy rhythm section that sometimes recalls the cohesiveness of early Brand X. In fact, Contrevent have two earlier releases, Jeu de Paume (1986) and Youkali (1989), which I'm not familiar with, so I can't offer comparisons — indeed this band is virtually unknown outside of their native Quebec — undeservedly so, because this is a remarkable album that everyone should hear.