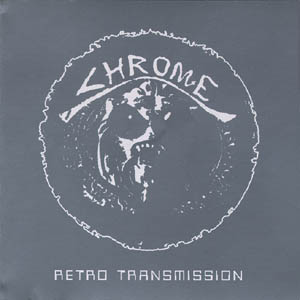 After a lengthy hiatus, Helios Creed has returned with a new Chrome album. Having never heard a Chrome album before I cannot say if this is representative or not. I can tell you one major influence on the band Pressurehed though. This album reminds me of Pressurehed a lot, so I must use reverse logic and assume Chrome did it first. The sound is a very metallic sounding pop with lots of spacey effects. Helios Creed is backed by the mighty Stench Bros. (I saw them with Pearl Harbor long ago), who are a great combo on drum and bass. The album begins with several techno-punk kinds of tracks and then four songs into this look out, they break into a tribal, psychedelic groove and never let up. Driven by the pulse of industrial pop, Chrome travels places you don't expect, but space is where you find it. Which again reminds me of Pressurehed, they both start out from the punk/industrial side and end up riding the psychedelic groove. If you like Pressurehed or feel like trying something new, I say take a chance, you might like this one.