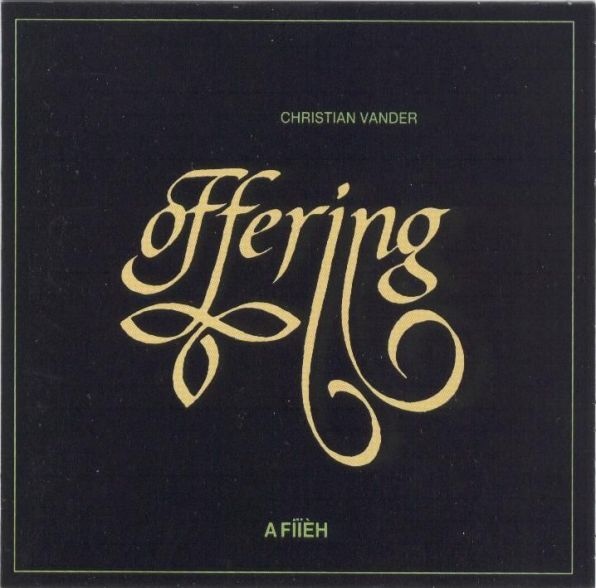 The third and most recent Offering album appeared in 1993, with a line-up more full than the previous two Offerings. It should be no surprise that Stella Vander, Isabelle Feullebois, Philippe Dardelle, and Emmanuel Borghi appear here, but the usual group is augmented by four other percussionists, four vocalists, and one more keyboardist. The opener, "Hymne Kobaïen," is a somber yet delicate synth/organ largo which almost feels like an homage or benediction. It should be noted that Vander doesn't step behind the drum kit at all on this Offering, but rather forfeits that role to Marc Delouya on the two of seven tracks that contain vocals. "A Fiièh" may have more focus than the previous two albums in this vein, but the style here is decidedly more minimalist, darker, and even more symphonic ("Cosmos"). The exception, however, is also the longest track on the album, "Purificatem." This one is a long, jazzy, drone that noodles around too much without really going anywhere. This track would have been much more at home with the first two Offering albums. Nevertheless, because of the strength of the first five tracks, this is probably the strongest Offering album and it contains some of the very best post-Magma music written by Vander.