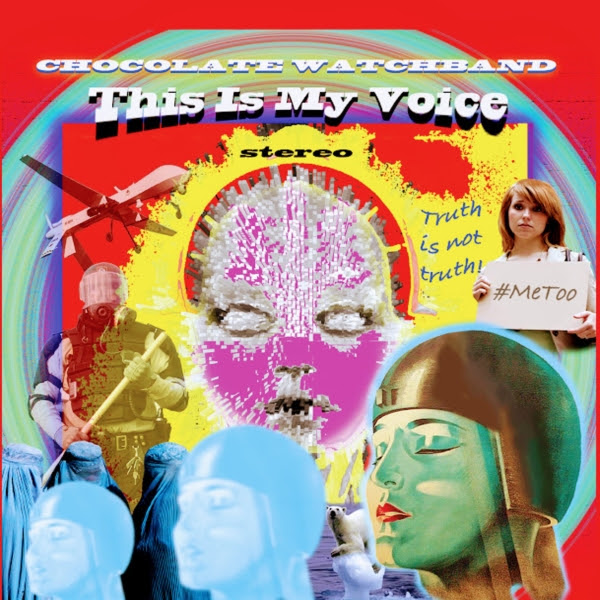 The 60s are over. They were over a long time ago, but their musical influence lives on, having left a mark on virtually every genre of music. So when one of the bands that actually went into making that decade what it was comes up with new music, there are bound to be expectations. Certainly The Chocolate Watchband does not rank with The Beatles or Rolling Stones in the pantheon of 60s groups, but they managed to record a number of classic tunes, and over the following decades came to be regarded as one of the essential garage bands of the era. Their energetic music attacked psychedelic rock with wild abandon, creating a sound that has stood the test of time. The band has a history so convoluted that it’s more or less impossible to identify a definitive version, but the current version definitely has a claim to legitimacy. Lead singer David Aguilar was a member from 1966-67, which was not the band’s ultimate beginning, but did include their first album. Gary Andrijasevich (drums) also wasn’t an original member, but has been in versions of the band off and on since sometime in 1965. Lead guitarist Tim Abbott toured with the group in 1967, though he didn’t record with them at the time. The others are newcomers: Alex Palao (bass) has played in Mushroom and other bands, and Derek See (guitar) has worked with quite a few groups, including the current incarnation of Rain Parade. But all of their bona fides would be pointless if the music wasn’t good, and I’m happy to report that it is in fact quite good. The original Chocolate Watchband albums weren’t really known for protest songs, though given the time period, I’m sure their shows were no stranger to anti-war and anti-Nixon messages. In today’s world, that sentiment makes an easy transition to contemporary social and political messages, notably anti-Trump. Ordinary folks are still getting screwed by economic and political bigwigs, and these guys are still pissed off about it. Once again, no amount of political protest (even if you agree with it) would overcome lame music, but Aguilar and company have hit upon a style that takes the original garagey energy, updates it enough to not sound dated, and just nails it to the wall. The advance single tunes, “Judgement Day” and “Secret Rendezvous,” are here, along with other winning songs. The title track has a great hint of Indian influence; “Trouble Every Day” updates the Zappa song with a rocking groove, honking harmonica, and timely excoriation of racial intolerance and right-wing news outlets; another vintage song, The Music Machine’s “Talk Talk,” gets a rousing treatment; and the original pieces are equally strong, with Aguilar’s “Bed” an especially good entry featuring harpsichord and slide guitar. Abbott’s instrumental “Bombay Pipeline” is, as the title implies, a kind of raga-surf-rock tune. The bottom line is that any fan of 60s rock of either the psychedelic or garage variety should find plenty to like here. This Is My Voice is the most consistently enjoyable Chocolate Watchband album since, well... ever, given how inconsistent they were back in the day.