Bill Bruford with Ralph Towner and Eddie Gomez — If Summer Had Its Ghosts
(Discipline DGM9705, 1997, CD) 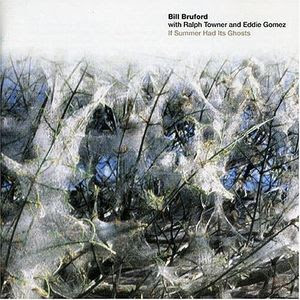 When Bill Bruford is on break from his drum duties with King Crimson, what would you expect him to do? Should he go on vacation or work in another less hectic, but rewarding mode? If Summer Had Its Ghosts is the result of one week's playing with two other world class players. Featured prominently in the eleven pieces is Ralph Towner of Oregon, also a noted solo artist and collaborator with John Abercrombie. Eddie Gomez is known for ten years of stand up bass work as one third of the Bill Evans trio. And yes this is a jazz trio album, and nearly a quartet due to Towner's doubling up on both guitar and piano. Stylistically the disc is Bruford's first ECM label 'mood' album as a leader, one of tone and color not necessarily hot chops. Bill is the primary composer except for Amethyst (Gomez) and the album's closing piece, "Now is the Next Time" (Towner). Melody lines are indistinct between improv and composition which is the stamp of a healthy creative dialog between listening contributors. Pulse varies based on individual tracks so don't expect any weird time signature showcase; Bruford uses many subtle facets of his percussive palette throughout the disc. However, he continues to deliver through his on-going compositional education. Notable tracks include "Never the Same Way Once" which features a spirited string bass solo by Gomez. "Forgiveness" is an unreleased Earthworks ballad featuring Towner's classical guitar and sparsely understated piano. It's disappointing that they won't be touring soon since the master drummer has re-formed Earthworks 2 and is playing throughout Europe for a few months. Although the disc may be slow to warm up to, if you like sophisticated jazz, then you'll be pleased by the nuances and spirited interplay.