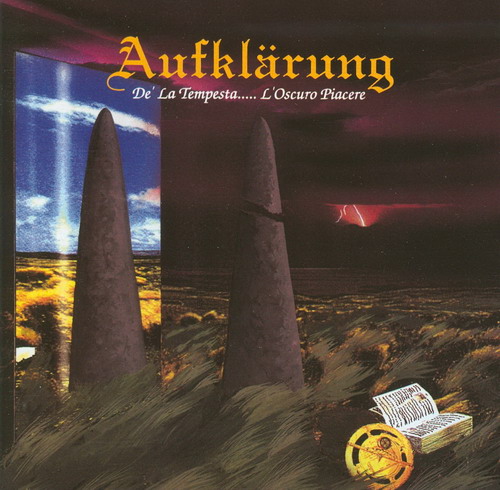 An Italian band with a German name that sings in English? Okay. Aufklärung is a five piece of bass, keys, drums and two guitars, with guest vocals handled by Chicco Grosso – if that name sounds familiar, he is the ex-singer of Asgard, who fronted that band on their first four albums and bailed after Imago Mundi. Interesting that a band with vocals on every track would use a 'guest' singer exclusively – my guess is that he really is a band member but cannot appear as such for legal reasons. Either way, it's good to hear this familiar voice again! Aufklärung's sound is in many ways like Asgard's was, but with a strong folk input and virtually none of the prog-metal antics – a very full symphonic sound, acoustic guitars occupying an equally important position as electric, together with fat Mellotron-ish string synths, a bit like the band I hoped Red Jasper might become someday but never did. Grosso's voice combined with the sound of the band might well remind of the Strawbs circa Bursting at the Seams or Hero and Heroine, many of those elements are present here and much more. Another point of reference might be Van der Graaf Generator, as Grosso's vocal demeanor frequently assumes a Hammill-esque air, and the music tends to be a little on the dark side. The album features four long tracks, each over ten minutes in length, each an epic of sorts, with multiple parts covering many alternating changes and mood shifts. Not particularly complex, as prog goes, but very warm and down to earth. Overall, a promising debut release from a band I hope we'll be hearing a lot more from in the future.