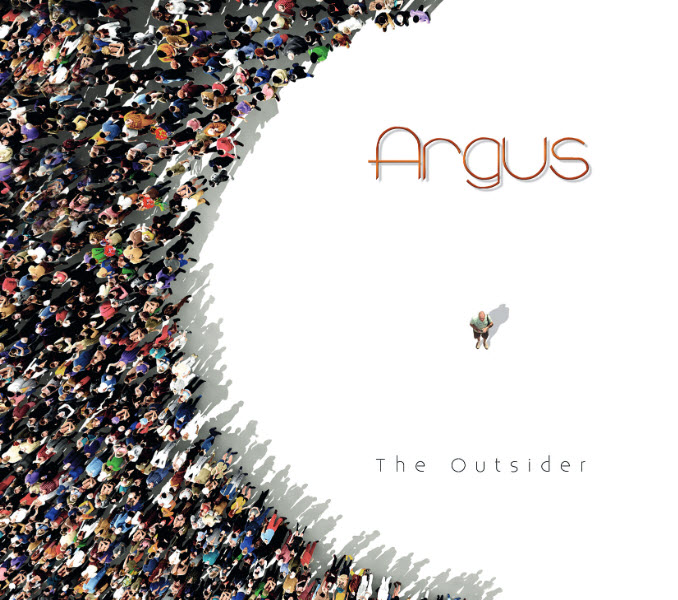 Argus was formed in 2008 when guitarists Wim Wassenberg and Ton Van Extel decided to team up and play songs by their mutual favorite band Wishbone Ash. Later, they added Ed de Groot (bass guitar), Frans Nooijen (vocals, keyboards, theremin), and Sven de Waal (drums), the latter three having played in another prog band Oalnego, and from that point began to develop their sound as a full band with original material. They released their first album, Tell Me, in January 2016, and continued to work their material, releasing The Outsider in December 2020, by which time de Waal had been replaced by new drummer Marijn Schellekens. Dropping the needle on the opening track “Depressed,” one might detect that unlike Wishbone Ash that featured a dual lead guitar configuration, the band’s sound is far more atmospheric and symphonic, not unlike mid-70s Pink Floyd, with van Extel playing rhythm guitar and Wassenberg focusing on lead guitar with some synth work and vocals. Nooijen provides the lead vocals as well as keyboards (Minimoog, Hammond) as well as the aforementioned theremin, and the rhythm section providing a powerful foundation for the proceedings. Twelve minutes later, the opening track finally winds down after a number of turns and twists, and as we proceed to “Some Time,” the evidence is there that the band likes extended panoramic arrangements, as this — at just over seven minutes — is the album’s shortest track, and even at that stretches out into numerous sections. The title track is another eleven minute monster, starting with a slower pace and a vocal section with a strong keyboard melody until the guitars break it wide open around the three minute mark, then shifting gears again a minute later. These guys are masterful arrangers, knowing when to build the power and intensity, when to shift gears into something new, and when to ease things down, holding the listener’s interest. The title cut also contains an interesting solo for theremin around the seven minute mark, then repeating the build up back to a powerful Floydian conclusion. With “Lost Girl” the band speeds it up some thanks to Schellekens’ busy opening drum pattern, bringing on a Collins-esque Genesis feel, punctuated by a gritty and powerful guitar assault by Wassenberg, until Nooijen comes in with the vocals at the song’s midpoint, which slows the pace down again. Argus is definitely a promising band with a strong balance of energy.

A.C.T. - Silence – I'm new to this Swedish quintet, but have to say I'm mightily impressed. In a nutshell, these guys have come up with a prog rock take on what Queen were doing in the mid 70s. Other reference points...  (2008) » Read more