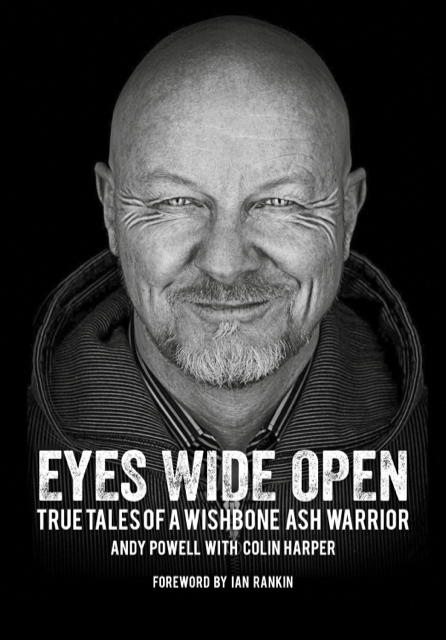 Skipping to the end, collaborator Colin Harper says in his closing notes that the intention was to produce a book that would not only be of interest to hardcore Wishbone Ash fans, a group which may be loyal and dedicated but is hardly massive, and (in my observation) wouldn’t be able to buy enough copies to make it worth the publisher’s investment. So, coming at Eyes Wide Open as a non-fan (I’m of course familiar with the band’s name, but have never really followed them), I can judge their success at achieving their goal. The book arrived in my mail unexpectedly, in close proximity with a new release from former Wishbone Ash member Martin Turner, so I figured some research was in order. I started listening to as many old Wishbone albums as I could get my hands on as I read the book. One of the recurring themes of the book is that Argus (1972) was the band’s high point, and I’d have to agree, though Pilgrimage (1971) is a very fine album as well.

In the “Co-Author’s Note,” Harper also says that he and Powell wanted to avoid the strictly chronological musician’s story of record-album-tour-repeat. That’s perhaps an admirable goal, but they’ve ended up messing up the order of things to a degree that I found confusing. As an example, at one point early in the book, Powell is describing events on a tour and mentions that his wife was there. Wait… wife? Did I miss something? No, he describes meeting and marrying his wife in a later chapter. A little disorienting, but I can deal with it.

From a musician’s (or music geek’s) point of view, details about writing and recording songs will be one of the attractions of an artist’s autobiography, but there’s relatively little of that. An entire chapter is devoted to Argus, how the four original members came together and jointly produced something really special that they could hardly comprehend at the time; several pages are devoted to what went wrong with Locked In (1976), and there are a few anecdotes here and there about other songs or albums, but frustratingly little for a muso to latch onto. It seems to me that Wishbone Ash’s primary contribution to rock music was a way of having two guitarists work together as “twin leads” rather than clearly defined lead and rhythm roles, and there’s not really any description of how they arrived at their formula. In fact the founding of the band is treated quite lightly, as are the early rehearsals and writing sessions. There are ten pages between the time Powell describes answering an ad in Melody Maker and the statement that 14 or 15 months passed between then and the release of their first album, and much of that is spent describing a trip he took to Morocco.

But in spite of my confusion, the book was a fascinating portrait of a creative soul, and the descriptions of growing up in 50s Great Britain were quite vivid. Powell comes off as a very sympathetic character, quite willing to admit that his viewpoint is not the only one, and when it comes time to describe the court case over the ownership of the band name, he wisely lets the witnesses’ and judge’s words tell the story, and doesn’t present Martin Turner in quite the negative light you might expect. (Turner lost and Powell retained the name, in case you’re not up on the legal history. I suppose if Powell had lost, this book probably wouldn’t exist.) Another really interesting aspect of the book is seeing how this band from the 70s managed the passing of their era while trying to remain viable. Their path, involving near-constant touring of modest-sized venues and direct engagement with fans, puts them in a unique position in today’s music market where all but the biggest stars find themselves in a DIY world of not being able to rely on labels and lucrative advances to keep going – they’ve been doing it this way for a long time. The other major impression from the book is of a healthy way of viewing a long career in music, especially when there was such a peak so early in the band’s history. The balance between respecting the early achievements and not giving up on writing new material is one that some other artists of the era seem to never have achieved.

I don’t know if this book will attract much attention outside the community of Wishbone Ash fans, but Andy Powell certainly has things to say that are worth reading, both entertaining and insightful. He makes a solid case for regarding music as a long-term commitment, and might very well convince you to check out some of the band’s later work if you weren't already familiar with it.

Alexander Vogel & Collaborators - Eight Releases from 2004 – Alexander Vogel is your atypical teenager with an affinity for percussion and English improvisational icons. In late 2004 he took it upon himself to begin solo home recordings which soon evolved into...  (2005) » Read more