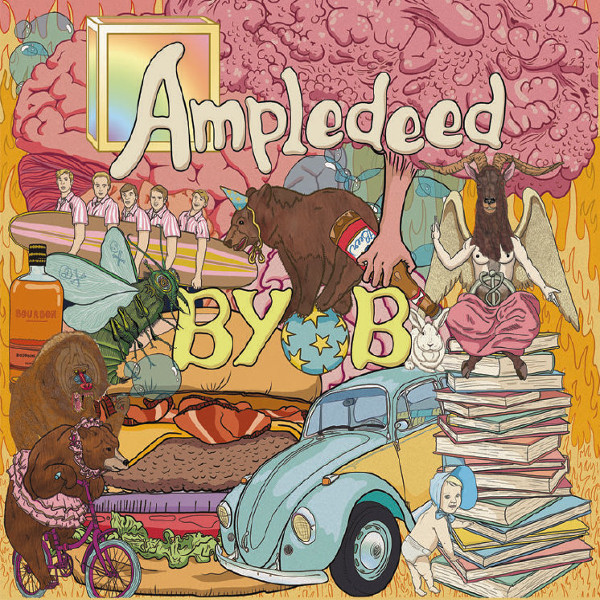 Three years ago Ampledeed released their debut album, A Is for Ampledeed. 2016 sees the release of their sophomore effort BYOB – so I assume that their next release will be brought to you by the letter “C.” The cover art reminds me of the children’s magazine Highlights, how many items can you name in the picture that begin with “B?” Looking closely I see bubble gum, brain, Beach Boys, bug, bee, bear, booze, burger, beetle, baby, books, Beelzebub, beer, ball, bike, bubbles, baboon, bunny, burning, bun, etc. I challenge you to find something I missed!

Now to the music. For BYOB, Ampledeed have expanded their lineup. In addition to original members Max Taylor (vocals, keyboards), Aaron Goldich (vocals, keyboards), and Luis Flores (vocals, guitar, cuatro), they’ve added Isaac Watts (drums, bass, vocals), Lisa Vitale (vocals), Allie Taylor (vocals), and Aaron Munoz (bass). In contrast to their first release that was mostly instrumentals, BYOB contains mostly songs. The musical compositions continue in the same direction charted by their first release; complex melodies and arrangements of jazz / progressive rock fusion. The addition of vocals, especially the female vocals, is a nice accompaniment to the music. On a number of songs there are interesting organ licks similar to Keith Emerson as well as some soaring guitar solos that impart a 70s ambiance to the modern progressive rock arrangements. Once in a while Ampledeed throws in a Robert Fripp reference for good measure. Ampledeed has matured over the past three years and BYOB is definitely a step forward from A Is for Ampledeed. Let us all hope that we won’t have to wait another three years for their next release.

If I had to pick a short phrase to sum up Ampledeed’s second album, it would be “meticulously complex.” It’s been nearly three years since I first heard this band, and it sounds like every minute of the intervening time has been spent assembling this sophomore effort. This is not the kind of music you can just throw together in a few weeks, with each tune built on one riff, a chorus, and maybe one other bit for variety. Each track, even the shorter ones, is composed of intricate interactions between guitars, keyboards, vocals, and rhythm section. Elaborate vocal arrangements are a big part of this Ampledeed collection: not only do the three original members all sing, but some of the newcomers do as well, most notably Lisa Vitale and Allie Taylor, whose parts nicely complement the male vocals and provide an appealing alternative sound. This band definitely fits in the stream of American progressive rock that stems from Echolyn back in the 90s, combining tricky rhythms and arrangements with catchy melodies immaculately sung. But they have developed a sound all their own, and can’t be pinned down in any particular stream of progressive rock. The thing they do best, and most impressively, is to produce music that leaves virtually nothing to chance (every drum fill and keyboard lick planned in detail) but doesn’t sound sterile and lifeless. It’s pretty hard to image the band pulling off this music in a live setting, especially given that all of them play multiple instruments, at least not without substantial reworking and adjustment. But that’s okay — BYOB manages to be exciting and full of the kind of intricacies that lend themselves to repeated listening. It’s an amazing achievement, and deserves a spot in the highest echelon of current American progressive rock.