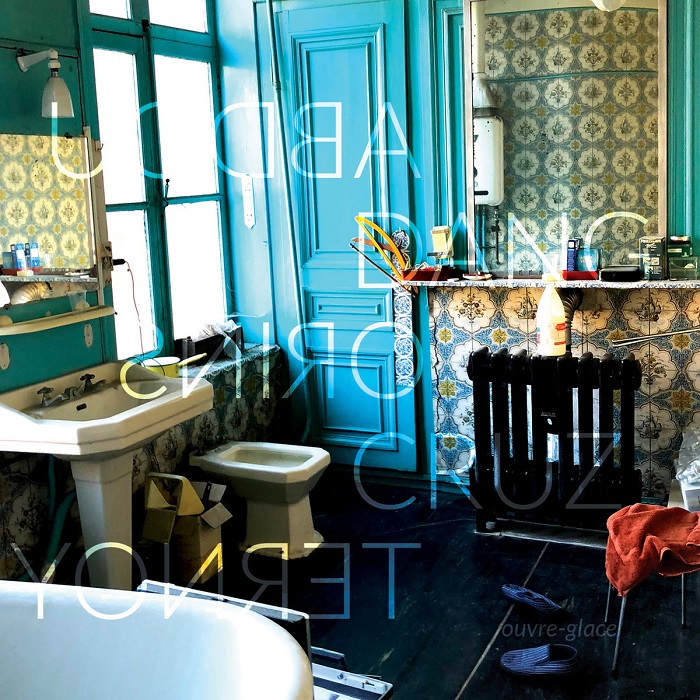 An interesting French release with the inside of a bathroom on the album cover. Tub, window, washbowl, bidet, even a fireplace, but where does that skinny little blue door go? And what or who is ADOCT? What’s in a name? Well, in ADOCT you will find TOC — pianist Jeremie Ternoy, drummer / percussionist Peter Orins, and guitarist Ivann Cruz, an improvising trio who we have covered numerous times in Exposé, as well as their respective solo albums. Then there is another trio, the aforementiond Peter Orins (he plays in both), saxophonist Sakina Abdou, and pianist Barbara Dang; the two trios, all members of the Muzzix collective, came together as ADOCT, and recorded and released Ouvre-Glace, which translates roughly to Ice Opener, six improvisational pieces recorded at La Malterie in Lille on December 15th, 2020. Initially the performance, a first meeting of all the musicians, was supposed to be held with an audience, but following a very complicated year in France due to health concerns, it was recorded without the audience present. The title track, a twenty-two minute improv, leads off the set with the concept that less-is-more: none of the five musicians dominates the sound, very touch-and-go, one might hear a piano, some percussion or prepared piano with a bit of guitar or a squeak or two from the woodwinds, all held together with sparkling glue in a magical trance, stretched out in real time. The effect is quite mesmerizing as everything unfolds, pure improv but atypical in that none of the musicians are making a lot of noise — no, this goes forward fairly quietly to its conclusion. After the six-plus minute “Carentiel” that at times seems like an extension of the opener, we come to the 20-minute two part “Immobilisme Pareux,” opening with a bit more substantial and lyrical, with saxophone dominating while guitar and pianos fill the background and percussion is supplied by bells, a ratchet, and other noisemakers. The two pianos offer plenty of possibilities, one can provode the bass element while the other dabbles in a brighter color palette. Two more lengthy improvisations, “Docteur Infini” and “Démenti Conforme,” round out the set to a full 75 minutes total, offering baskets of gentle surprises, novel wanderings, and a set that, while explorative and purely improvised, never becomes abrasive or harsh. An outstanding release.