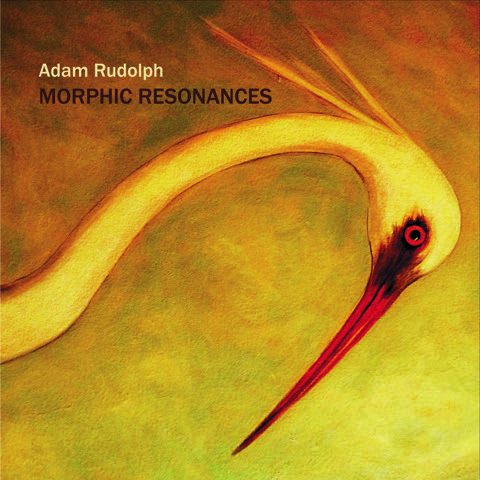 With Morphic Resonances, percussionist Adam Rudolph presents a collection of music composed for various small ensembles, none of which fits in with what might be thought of as his primary niche, world-influenced jazz. But he is a deep thinker about music and the processes of creating it, and here he applies his ideas in a different realm than we’ve heard before. We start out with two pieces written for the Momenta String Quartet, and while the theoretical ideas may come from a different place, the general impression is similar to 20th Century quartets like those of Anton Webern and Arnold Schoenberg. The music is rhythmically and harmonically complex, largely based on scales other than the standard modes of European music theory, some of which is explained in the liner notes, though not in great detail. There are frequently passages where the individual parts are playing in contrasting rhythms. As a listener, you can just take it in, and while it’s not the kind of string quartet music that sucks you in with memorable melodies, it presents an impressionistic journey, with some sections of frenetic pizzicato notes, some eerie passages with harmonics and glissandos, and times of relative calm where interlocking patterns fall into hypnotic cascades of notes. While I’m no expert on modern string quartet music, I find these two pieces as interesting and challenging as any I’ve heard, and would love to see them enter the repertoire for other groups to play. Momenta’s performance is outstanding, attacking the difficult material with energy and feeling.

“Garden, Ashes” is one of two pieces written for flute and acoustic guitar, an evocative and virtuosic exploration of harmonic and rhythmic possibilities. It’s performed by Kaoru Watanabe and Marco Cappelli, and Watanabe’s flute cadenza towards the end is a cathartic outpouring of notes. The next piece is a short violin solo played by Sana Nagano, whom I had previously encountered in a trio with Harvey Valdes. Her playing is fluid and emotional, seemingly effortless in spite of the difficult material. While a percussion quartet might seem a natural venue for a composer who’s a percussionist, there is quite a lot of difference between the improvisational world of jazz and world music and the composed realm of orchestral percussion. But rhythms are rhythms, whether they’re written down or generated in the moment, and it’s revealing to hear the principles of Cyclic Verticalism applied in a pristine form. Vibraphone is the only tonal instrument, and it’s joined by an assortment of tom toms, cymbals, gongs, snare, and other things. The result is far from academic, and also far from a percussion jam, with a section in the middle where the tempo floats subtly, eventually giving way to a part with the spotlight on the snare while the others maintain a 27-beat ostinato (there’s a page of the score in the booklet — I didn’t analyze it myself). This kind of percussion music is fascinating, and I could listen to much more of it. (You can watch a different group perform it here.)

The final two pieces are both relatively short. “Coincidentia Oppositorium” features an eight member ensemble of piano, cello, trombone, violin, clarinet, trumpet, double bass, percussion, voice, and musical saw (with some musicians doubling up). In some ways, it is the piece that most resembles jazz, but it uses many of the same types of compositional techniques that were used in the string quartets. In its four minutes, there are bursts of chaos, moody quiet sections of wordless vocals, and a mournful violin melody. Finishing off the set is the other guitar and flute piece. On “Lamento,” Watanabe plays a nohkan flute, for a natural, mournful sound, and Cappelli engages in a number of unusual techniques on the guitar. It is a meditative and calming finish to an impressive body of music.