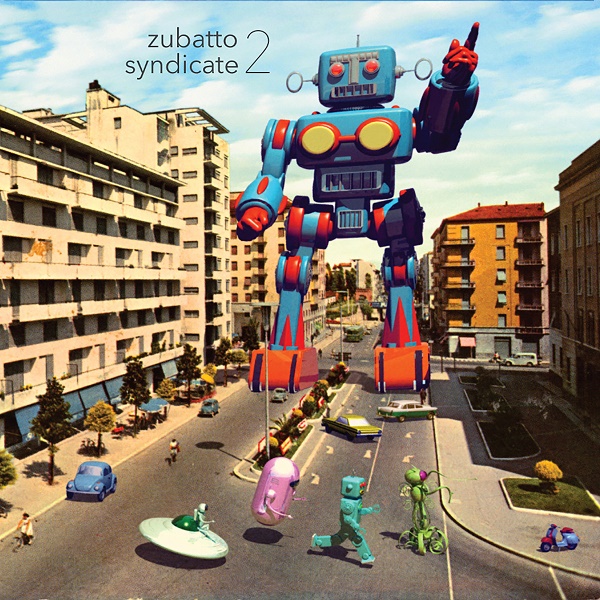 Looking at the second Zubatto Syndicate release, two facts are apparent. First, the sci-fi imagery from the first album carries through with the great cover art and titles like “BBots,” “Gort’s Big Day,” and “Go Go Giant Robo.” Second, two of the titles look suspicious: “Master of Puppets” and “The Zeyoncé Suite.” What’s up with those? The CD starts out with “BBots” and an uncharacteristic bit of synthesizer noodling, but then the big band kicks in, and we’ve got some classic Zubatto going on. By “classic Zubatto” I mean a modified jazz big band of brass, saxes, and a rhythm section augmented by some unexpected sounds from double reeds. The clarinet, oboe, and bassoon give the ensemble an orchestral tint, but the prominence of leader Andrew Boscardin’s electric guitar leads in a rock direction. The overall sound comes off as reminiscent of classic soundtrack music from the 70s – you could easily imagine them playing the theme from Streets of San Francisco or Ironside. To a listener unfamiliar with the original, Boscardin’s arrangement of Metallica’s “Master of Puppets” wouldn’t raise an eyebrow – it sounds completely of a piece with the rest of the tracks, and even a Metallica fan might not pick up on the source immediately. The same goes for the medley of Beyoncé songs… and as I’m not really very familiar with her music, the only thing that stands out is that the melodies are less twisty, more hummable. (It occurs to me that for many publications, admitting to unfamiliarity with Beyoncé’s music would be tantamount to an admission of incompetence, but luckily that’s not the case here at Exposé.) Special mention is in order for “Iggy (Igneous Carapace),” a live favorite getting the studio treatment here, and in addition to a fine guitar solo from Boscardin, it features an amazingly acrobatic clarinet solo from Beth Fleenor. “Thyonean Butt Rock” is another stand-out piece. I don’t know where Thyonea is, but their music is cool. Zubatto Syndicate are like the fun, eccentric uncle at the chamber-rock / RIO family reunion, the one who hangs out at science fiction conventions and joins geeky anime clubs.