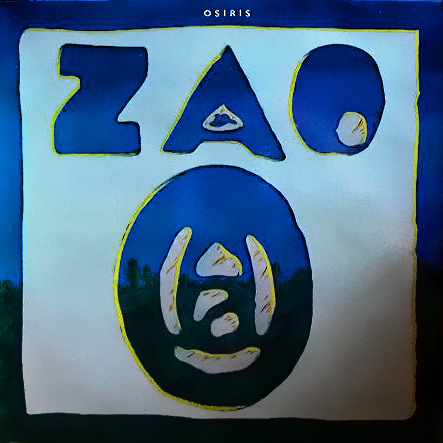 Zao's second album was recorded in 1974, and originally released on Richard Pinhas' startup Disjuncta label. Despite the minimal resources available to Pinhas, Osiris fared well, surpassing sales of Zao's debut album. Unfortunately, the label went under in 1975, and its albums, including Osiris, were deleted. Now twenty years later, Musea's reissue has finally revived this early zeuhl classic. As on their first album, Zao's music bears a cursory resemblance to the early Magma sound, but Osiris finds them starting to develop more of an original, fusion-based style. Founding members Francois Cahen and Yochk'o Seffer bring a jazz sensibility to the group, but the repetitive riffs driven by a heavy fuzz bass and the slow, deliberate tempos give this album first and foremost a very strong zeuhl feel. The soloing is moody and atmospheric as opposed to jazzy and technically showy, and the few vocal sections are quite reminiscent of Magma in their dark and ethereal nature. The CD reissue includes a 12-minute bonus track, recorded by Cahen and Seffer in 1973 with a different band, which is probably the strongest piece on this release. The lively tempos and active instrumental performances avoid the slight tediousness which occasionally afflicts the tracks on the album proper. Zao would not hit their peak until a few years later, but Osiris remains an interesting and compelling album that has thankfully received its long overdue reissue.