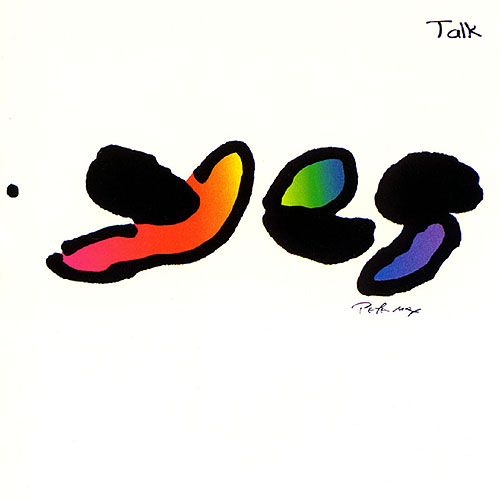 Here's yet another album with the Yes name on it that bears almost no resemblance to the band's classic period, essentially a Trevor Rabin solo album with Jon Anderson singing. First, I've got to say something about this god-awful new Yes logo, I mean, is this a joke or something? So what if Peter Max designed it, it's obvious that he's past his prime too — so I guess the packaging is a perfect match for the contents after all. On to the music. Where is Squire's bass? Where is Kaye's Hammond? I don't hear much of either of them anywhere, just Rabin's guitars and synths, Alan White's lifeless drumming, and Anderson's voice, with vocal backing from Rabin and Squire. To be sure, there is a bass present, but like on 90125 and Big Generator, Squire appears to intentionally be hiding his identity. Tony Kaye, on the other hand, sounds like he was left out of the mix pretty much altogether. The first five tracks, comprising about 66% of the album, are straight ahead guitar rock, no frills save Anderson's voice. The opener, "The Calling," seems like an attempt to re-create the success of "Owner of a Lonely Heart." These five tracks are truly pretty good for what they are, but musically challenging they are not. Then things change: "Where Will You Be" is a lighter track with good vocals from Anderson, no heavy guitar, and a kind of a trace ethnic feel. After that we come to the long track, sixteen minutes of "Endless Dream," which clearly hints of earlier times, even White loosens up here a little, but those phoney-baloney 90125-ish dramatic sequences just aren't convincing when stacked up against classics like "Close to the Edge" or even "Awaken." Overall, though, it's a good track, possibly the album's best. In short, it's about par with 90125, not a total dog like Big Generator, but if you're interested in hearing something that sounds like classic Yes, save your money and check out a band like Realm.