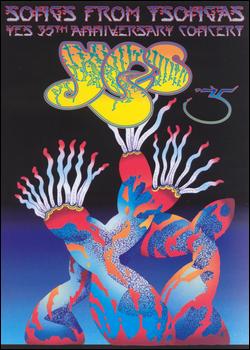 Yes' management has done a pretty good job documenting the various incarnations of the group since the botched Keys to Ascension reunion shows from 1996. Ensuring the classic line-up was intact was of topmost importance as well, with Rick Wakeman back in the keyboard chair to play rarities and little performed pieces. This well-edited Soundstage PBS concert from the end of an 18 city tour shows the well-oiled touring machine playing a balanced top notch set of pieces from the 70s such as "Going for the One," "Ritual," and "South Side of the Sky." Leading off the concert with a kick ass rock tune was a smart choice as Howe's pedal steel playing sets the tone for the entire show. New pieces in the set included the fan-requested "Mind Drive," which works well on the live stage with its unison riff leading into one of the better pieces written by the band in mid 90s. Re-arranged versions of pieces include a Chicago blues styled "Roundabout" and "The Meeting Room/The Meeting" the latter track pulled from the ABWH self titled recording. Flat out surprise songs include "Sweet Dreams" introduced by an Alan White drum fill, "Turn of the Century" and the first encore of the Beatles "Every Little Thing" which likely had not been played since the first band first formed. Overall it's the best video and sound quality for a complete Yes show available on DVD.