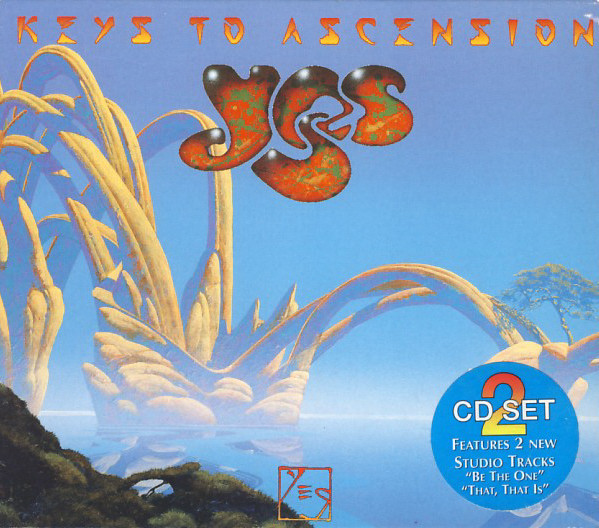 Yes fans arrived from the furthest corners of the U.S. and on the night of March 5 this formation of Yes hit the stage for the first time in 17 years. Over three nights the band performed a set of music that spanned from 1970's Time and a Word to 1978's Tormato with 1972's Close to the Edge performed in its entirety. Tracks were culled from the shows, and with two new studio recordings, released as Keys to Ascension Vol. I, all wrapped up in a new Roger Dean package. Volume two, due out after the new year, will fill out the remainder of the live shows with even more new studio work.

The live material sounds fresh and precise if a bit sterile. As compared to the band on Yessongs (1973) or even Yesshows (1976-78), this Yes is very controlled and polished — too much so for my tastes. I find that a live setting is often an opportunity to raise the energy level of studio recordings but in this case Yes has opted for a statement of consummate control. Also, some controversy has been raised among those who were at the shows who don't recall the songs sounding quite so good. And where did those extra harmonies come from? What we have here is not a snapshot of Yes The Live Band circa 1996, but rather, a second look at some classic material using live recordings as a starting point, in order both to accommodate the fans who wanted a live show, and, I would assume, to give the tracks a better group vibe and cohesion.

More eagerly anticipated for many were the two new studio tracks. "Be the One" clocks in at nearly 10 minutes and "That That Is" (recalling the idiosyncratic wordplay of "And You and I") comes in at over 19 minutes. However, more is not necessarily better, and while on these tracks we see Yes reaching for the expansiveness and grandeur of earlier epics, these songs are only partially successful at reaching those heights. "Be the One" in particular sounds as if it was thrown together on relatively short notice and Chris Squire's recent comments that the basic track was laid down in one take tends to support this. "That That Is" is clearly the stronger of the two tracks, with Steve Howe laying down some sublimely restrained acoustic work that springboards into one of those classic Chris Squire bass riffs in which the fire and killer instincts of the old Yes are all too briefly glimpsed. Also, Jon Anderson's lyrical themes of the L.A. ghetto may be a bit pointed to some more in tune with his more recent new-age utopian visions but I found them refreshing and totally current.

In perspective, Keys to Ascension really comes across as a hybrid studio / live effort with the emphasis placed on the studio side of the ledger. On the positive side, it does appear that the band has managed to rediscover the chemistry that made them the incredible force in music they once were. Whether the band can live up to their reputation has only been partially answered (and not wholly successfully) and is a question to be taken up again in the future.