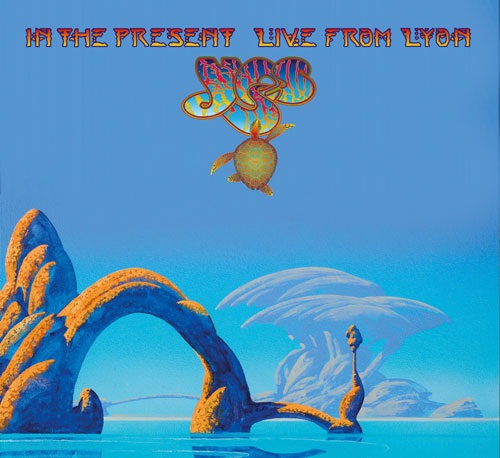 In the Present is a three-disk audio and video document (2 CD, 1 DVD) of Yes on stage in Lyon, France during their 2009 tour. In retrospect this was not Yes’ finest hour. Online sniping dogged the band as they crossed the globe, primarily due to the absence of singer and founding member Jon Anderson, but also because of the shaky quality of many of the shows, which this package unfortunately captures. From the opener, “Siberian Khatru,” singer Benoit David – plucked from a tribute band the previous year – struggles with pitch and is clearly straining in places, made all the more obvious by a mix that ironically enjoys marvelous separation and clarity. The band also obviously thought having a Wakeman — Rick’s son Oliver in this case — on keyboards would lend some legitimacy to offset Anderson’s absence. Except his performance is largely unremarkable, despite some earthy organ work on older songs like “Starship Trooper.” Perhaps most troubling is the lack of fire and the snail’s pace tempos throughout the set. Guitarist Steve Howe is playing behind the beat on many songs and drummer Alan White seems capable of only the most rudimentary of time keeping. On the whole the band is a plodding, aged shadow of their former selves. The highlight in the lineup is Chris Squire, whose familiar harmony vocals and bass work anchor the performances. Plus the set list offers a break from some of the tired chestnuts with the inclusion of songs like “Machine Messiah” and “Astral Traveller”.

The package improves on the DVD side, which takes a quasi-documentary approach with short interview segments slotted in between chunks of the band performing on stage. The lack of complete songs probably won’t be missed (though a complete “Machine Messiah” was nice) because most Yes fans already have umpteen video records of them. The interview material is good, though many of the usual suspects crop up (“What was it like playing with John Lennon?” for example). As an audio-visual offering In the Present has many things to commend it. Unfortunately for Yes, their abilities as a performing band isn't one of them.