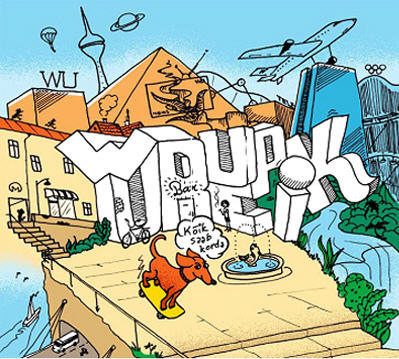 With sure-footed mastery, this Estonian seven-piece instrumental ensemble navigates through treacherous waters of rock, jazz, funk, art-punk, psychedelic, and all combinations thereof with finesse and impeccable brilliance. There’s a lot going on within these eleven tracks that cut across numerous genres while remaining thoroughly challenging and yet surprisingly listenable. No two songs here sound like they are cut from the same cloth, yet as a diverse collection of instrumental ideas the concept works and keeps bringing one back for repeated listens. In addition to guitar, bass, keyboards and drums, the lineup is rounded out with trumpet, trombone and baritone sax, offering a rich and diverse palette from which the band can launch into just about any exotic idea of their choosing. At various points along this wild ride, one might hear stylistic echoes of Zappa, Canterbury bands, Allman Brothers / Sea Level, Jaga Jazzist, various pan-European psychedelic folk and rock elements, some highly charged fusion and artsy jam styles, and even some classic Pink Floyd influences. Every player gets many chances to shine brightly throughout, but by all evidence these are tightly composed works, not improvisations. Kõik Saab Korda is Wrupk Urei’s debut, originally a download-only release from 2012; AltrOck has picked it up for wider distribution on CD in 2014. Meanwhile the band has already released a second album Teahupoo from 2013, that hopefully we will be covering here soon. One can’t go wrong with this one, however; every cut just sparkles with brilliance.

Fish - Vigil in a Wilderness of Mirrors & Internal Exile – Ex-Marillion lead vocalist Fish has spent much time floating from label to label after departing his old band for good. Voiceprint took the singer’s back catalog and has done a second...  (2003) » Read more