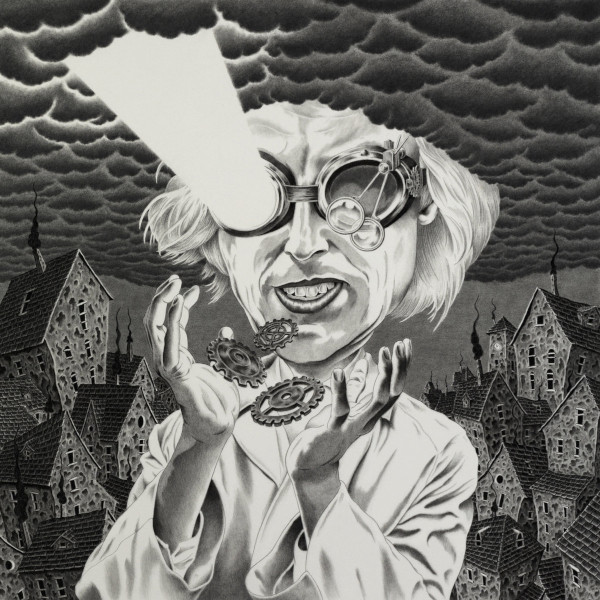 I first encountered Andrew Plummer last year with Bunny from his other band, Snack Family. World Sanguine Report has actually been in existence longer than Snack Family, with its first album released back in 2009. All three members of Snack Family — Plummer on vocals and guitar, James Allsopp on woodwinds, and Tom Greenhalgh on drums — are also involved in World Sanguine Report, along with Alex Bonney (trumpet), Matthew Bourne (keyboards), and Ruth Goller (bass, vocals); several others appear as guests, including Seaming To, who also guested on Bunny. WSR’s sound, partly owing to the expanded instrumentation, is more diverse than Snack Family’s, ranging from moody Tom-Waits-on-acid impressionism to Nick-Cave-on-amphetamines post-punk noise-jazz with lots of shades in between. The songs are consistently unpredictable, lurching from lumbering cabaret-noir to chaotic improvisation and electronic weirdness. The arrangements feature changes in tempo and rhythm that seem to borrow from math rock, and dramatic (but warped) sections that contain hints of old-school progressive rock. It’s much looser than anything Frank Zappa would have produced, but does have a lot in common with Captain Beefheart. Each one of the 14 tracks is distinct in mood and sound, with Plummer’s gruff voice the primary common factor (barring the purely instrumental parts), though the explorational spirit, pushing boundaries of musical convention, is the true essence of WSR’s identity. I’ve lost count of how many times I’ve listened to Skeleton Blush, and every time through provides just as much discovery and enjoyment as the previous. This is an outstanding album, an unpredictable and intriguing amalgam of musical art and storytelling that deserves broad attention.