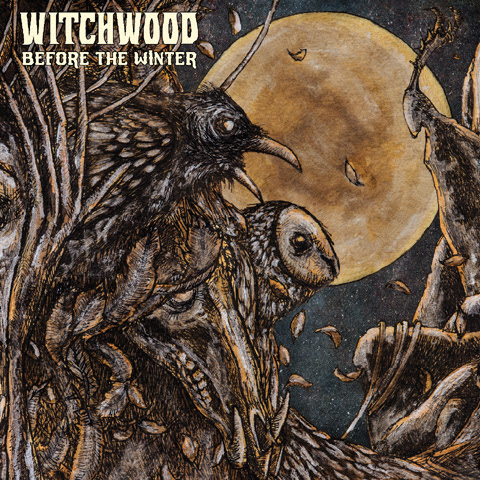 Witchwood is a powerful Italian band with a great lead singer in Riccardo dal Pane, combining the power and grit of many classic singers from the early 70s. The band blends elements of an early 70s blues-rock / hard rock style with some contemporary elements, a helping of prog, and features English lyrics. Before the Winter is either their second or third album, depending on whether one chooses to call the second, 44 minite release from 2016, Handful of Stars, a full album or an EP (it did contain covers of Uriah Heep and Blue Öyster Cult songs, two of their influences, but still plenty of original material), but here we are five years further on with something new and the band showing plenty of growth during the last five years. They are a six-piece, and the balance of the group features guitarist Antonino Stella, bassist Luca Celotti, drummer Andres Palli, organist / keyboardist Stefano Olivi, and Samuele Tesoni on flute. The album is ten tracks totaling 63 minutes spread across four LP sides (vinyl in various colors and black, all limited editions) or a download edition without the bonus track — an impressive and extended cover of “Child Star" from the first Tyrannosaurus Rex album. So what do they sound like now? This is clearly hard rock with a strong blues element, something that might be right at home on the Black Widow label — not talking heavy metal here, more of a proto hard prog style that will take the listener right back to the early 70s reminiscent of a number of bands in their heyday — Deep Purple, Uriah Heep, and Black Sabbath may come to mind immediately, but the incorporation of flute might remind of Jethro Tull or even the more hard rock side of early Jade Warrior, but dal Pane’s vocals really give the band a unique character. There are some gentle tunes here too, for example “A Crimson Moon” begins as a duo of flute and acoustic guitar, with vocals joining about a minute in, then later the rest of the band. “Nasrid” follows a similar trajectory, but with some wordless soprano vocals (presumably a guest) animating the piece. By far the most impressive and proggy number is the near-eleven minute “The Lighthouse Chronicles Part Two: Slow Colours of Shade,” which snakes through numerous sections along its lengthy path. Before the Winter is definitely an album worth checking out.