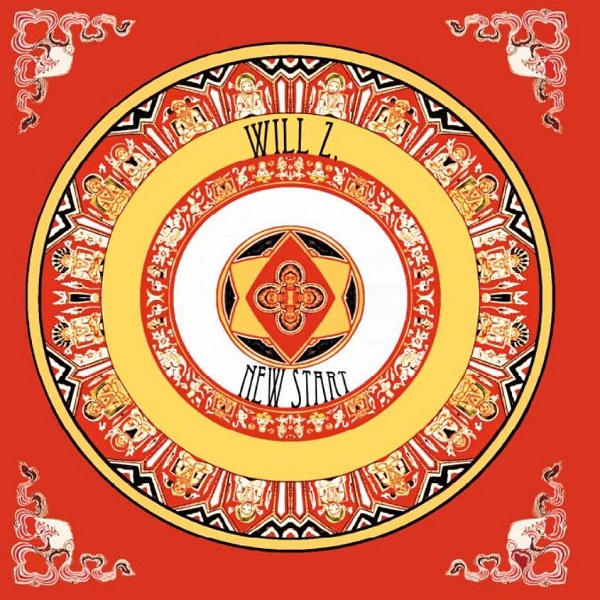 Part of the joy of reviewing is the exposure to new music and unknown artists. In this case we have an artist known as Will Z. There is very little information available about who Will Z. actually is. All that I can find out is that Will Z. is a singer, songwriter, multi-instrumentalist, and producer who first appeared in his band Cosmic Trip Machine in 2008. Since then he has dabbled in several musical genres from dark occult rock to hard rock to acid folk to baroque pop. On June 8 Mega Dodo released Will Z.’s new solo album New Start. There are six tracks listed, but in reality what you have are two side-longs tracks of some of the best cosmic cum psychedelic music you can hear since the 70s. Will Z. sings, plays 12 string and acoustic guitar, electric guitar, wah-wah fuzz guitar, keyboards, piano, sitar, bass, Mellotron, synths, and xylophone. Joining him on this record are Juan Arkotxa (flutes), Leslie MacKenzie (percussion), Carmeta Mansilla (vocals), Alice Artaud (vocals), Adam Geoffrey Cole (oud), Anne (synths), and the late Daevid Allen (glissando guitar). New Start opens with “Jain Devotion (Parts I – III)” and closes with “Jain Devotion (Parts IV – V).” “Jain Devotion” begins with some watery electronics that over the course of several minutes resolve into electric guitar and drones, drifting eventually into Krautrock ala Yatha Sidhra’s A Meditation Mass. About halfway through the opening track Will Z. begins to sing and I was struck by the similarity to Andy Latimer of Camel. Daevid Allen joins in on the closing track to create a more floating, relaxing vibe making “Jain Devotion” an aural mandala. Sandwiched in between are “Namo” with its repeated metallic rhythm, simple melodic sequence, and unintelligible vocals, “Evil Namo” that becomes amorphous and dark, “Greek Loop” with its temple bells and wordless singing that reminded me a bit of Popol Vuh, and “Nefle” with fuzzed guitars that develop into something Harmonia would have played. Quite an excellent new release, the likes of which we have not heard in decades!