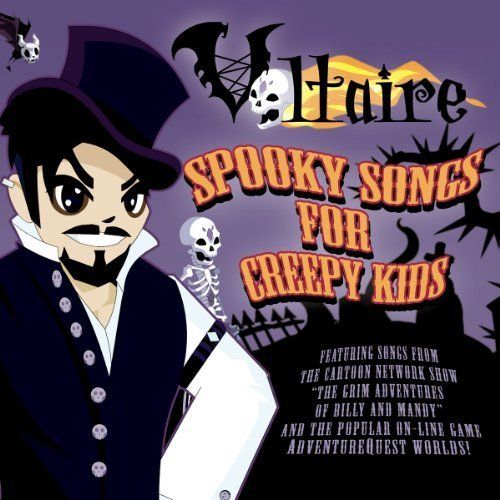 Aurelio Voltaire Hernández aka Voltaire is a popular dark cabaret Cuban-American musician. He is also an experienced animator, comic artist, and a professor at the School of Visual Arts in New York. Voltaire is essentially the Weird Al of goth music. His songs, though not always covers, lend a comic light-hearted element to an otherwise dark subject matter. His music has been featured on the Cartoon Network's The Grim Adventures of Billy and Mandy and the online role playing game AdventureQuest Worlds. This disk collects these songs and makes them available to his growing horde of 12-year-old fans. In addition to the Grim Adventures tunes ("Land of the Dead" and "Brains") and the Adventure Quest songs ("Day of the Dead," "Tempest," "To the Bottom of the Sea," and "The Beast of Pirate's Bay") there is the Twilight lampoon "The Vampire Club," kids' versions of "Cannibal Buffet" and "Crusade," "When You're Evil" from the Deady mini-game, and his original versions of "Goodnight Demonslayer" and "The Beast of Pirate's Bay." This is a fun collection of juvenile songs that you could share with your children. I can easily visualize children wearing the disc out through endless repetition, driving adults insane. Though categorized as Dark Cabaret music, this disk is more of an illuminated cabaret along the fanciful lines of Danny Elfman.