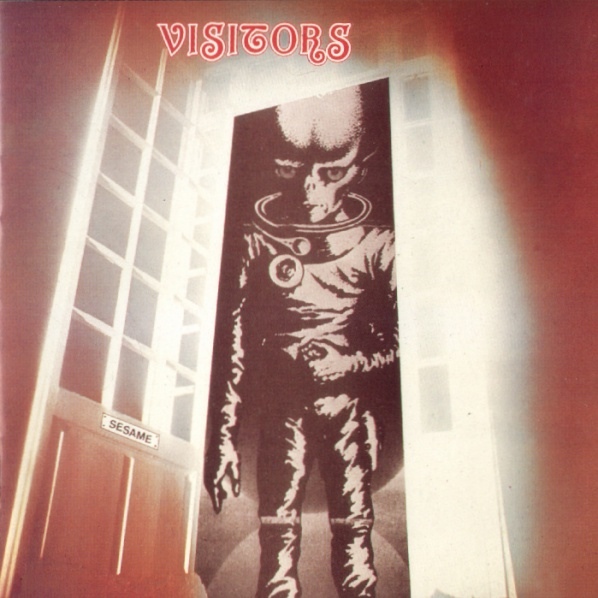 Here is a short one-off Musea reissue that deserves some notice. Forget the tacky artwork of the alien invaders, Visitors contains some very strong music. Believe it or not, there are 20 musicians (including four keyboard players) and singers (11 to be exact) on this obscure French concept album from 1974. The music bears a strong resemblance to Vanilla Fudge and Deep Purple but there are enough experimental sound effects and studio tricks to keep the music out of the seventies rock idiom. The Gregorian singing that pops up in several places anticipates the gothic bands of twenty years later. The music works on several levels but it may take several listenings for you to get into it. But at 30 minutes, who cares? Visitors is definitely a Musea release to buy, if not for the music, then for Didier Lockwood’s pre-Magma performance.

The brainchild of producer Jean-Pierre Massiera, Visitors was his project "band," intended to be a one-shot affair and go no further. Massiera utilized an expanded lineup featuring several lead vocalists (including himself), multi-guitars, multi-keyboards, basses, Fender Rhodes, violin, and multiple backing vocalists, somewhere between eight and fourteen members, with a lot of extras standing in. Musicians of note include Bernard Torelli (guitar) who later turned up in Atlantide, and most notably the Lockwood brothers Francis and Didier on Rhodes and violin respectively, the latter who would go on to Magma, Zao, and a prolific solo career. "Dies Irae" opens the album, a haunting progressive hard-rock opus with Gregorian-like chanting, heavy organ with Leslie, and vocal harmonies that sometimes recall early Blackmore era Deep Purple or Vanilla Fudge with heavy reverb applied — a powerhouse of invention, ripping guitar, violin solos and all-around heavy jamming. Throughout the album, the vocals (mostly in French) are arranged in a typically early 70s rock style, with the addition of Massiera's low-pitch, often demented ravings — no more so than at the beginning of "Terre-Larbour," where the multi-synths and effects grow out from behind his frightening introduction. The Lockwood brothers seem to bring a jazz element to the music, although it rarely overpowers the rock base. There is plenty of experimentation here as well, especially with vocals, as evidenced in "Nous" or the title track. I must admit that I wasn't overly impressed with the album on first listen, mainly because of its dated elements, although certain things did stand out. By the end of the third listen I was completely sold, this is a brilliant album, extremely inventive, with top-notch musicianship throughout, and one that I'm sure many would enjoy.