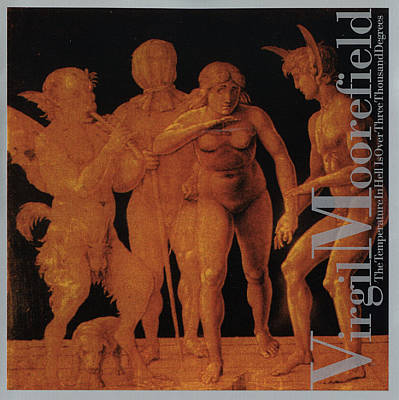 Forget that you ever heard of Virgil's last Cuneiform outing Distracions on the Way to the King's Party, because this album simply has nothing to do with that whatsoever. Virgil is currently a 42-year-old student pursuing a PhD in composition from Princeton University. This album was probably the result of a homework assignment in "21st Century Minimalism and Dissonance" or something. Just note that the album is part of John Zorn's "Composer Series" and you will start to get the idea. Violin, sax, clarinet, cello, bowed and fretless guitars, all scrape, squeak, whine, and squonk while Vigril supposedly performs his parts on an old Yamaha DXII from the dawn of MIDI and an older ARP 2600. If he's in fact playing them at all — he's way, way, way in the background, because the aforementioned acoustic instruments are the main focus of the pieces. If you like ultra-modernistic, free-form, microtonal, minimalist, experimental, academic noise-excusrions, then you are bound to enjoy all three-thousand degrees of Hell that Virgil has prepared for you. Perhaps the best review of this album, though, comes from the liner notes themselves: "...whenever the group does crank it up, the music seems to veer off into something that isn't quite right... [attempting] to construct a music by imaging the sounds Beethoven must have been hearing as he went deaf, brausen and summen, a bubbling and humming." On the other hand, if you ever wanted to host a haunted house for the neighborhood kids, you'll wish you had this CD in your collection for use in the first hallway.

Thriving Ivory - Thriving Ivory – It’s been quite sometime since a solo pianist was credited as an alternative rock band’s key instrument replacing loud, overdriven guitars. Such is the case for Thriving Ivory is a five-piece...  (2004) » Read more