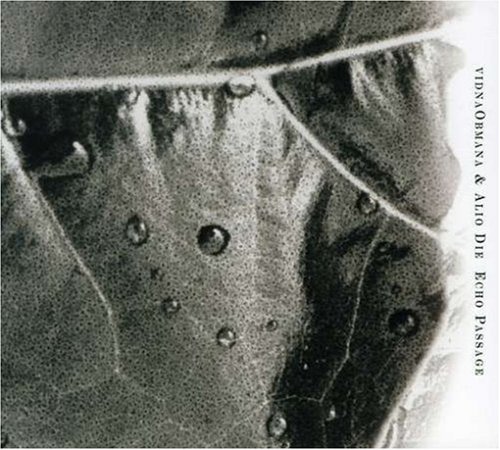 Both Vidna Obmana and Alio Die are masters of dark ambient drone music. Echo Passage, a reissue of their 1999 release on Musica Maxima Magnetica, is one long track roughly 68 minutes in duration that is actually three separate pieces (movements?): “Echoes of Light,” “A Slip of Darkness,” and “The Passage.” The CD does not have any indexing and the packaging does not provide any timing information. So the only way to tell which piece you are listening to is by the subtle changes in musical textures. Personally I find it irritating when artists release these musical marathons without an easy way of locating a particular passage. It forces you to listen to the CD in its entirety, rather than small doses. The music on Echo Passage is amorphous, expanding and contracting, seeking recognizable forms, but never quite making it. Resonant drones, loops, electronics, and heavily processed samples move slowly past one another building tension as you begin to perceive the underpinnings of its structure, only to have it gracefully released and redistributed in another dimension. This is soothing, relaxing music that does not scream for your attention. It provides the perfect background for unwinding at the end of a busy day.

Incandescent Sky - Paths and Angles – Since their second release Glorious Stereo (reviewed in #28), Incandescent Sky has further carved out an identifiable niche for themselves in the guitar-driven jammy instrumental progressive style....  (2006) » Read more