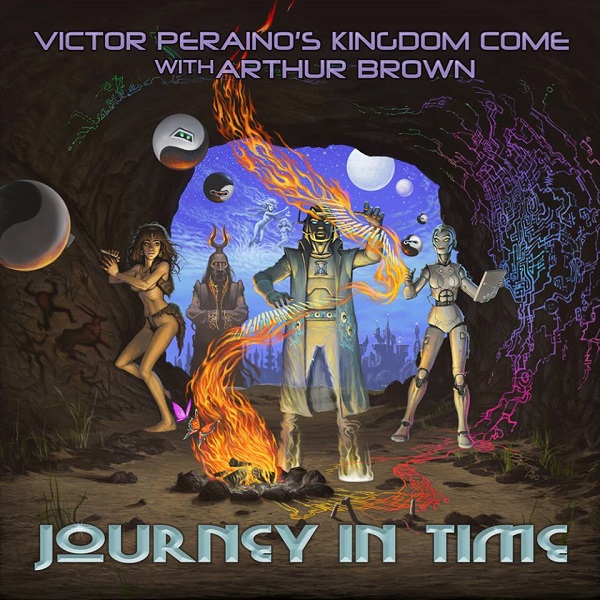 Arthur Brown has had a very long and varied musical career starting back in the 60s. In the early 70s he formed the band Kingdom Come to continue his theatrical histrionics and craziness. Kingdom Come released Galactic Zoo Dossier in 1971 and both Kingdom Come and Journey in 1972. After that the band broke up. And for some strange reason, their keyboardist Victor Peraino retained the rights to the band name and returned home to the US and LA to continue performing as Victor Peraino’s Kingdom Come. He released an album No Man’s Land in 1975 and that was it for about 40 years. Now Victor has reformed the band and convinced Arthur Brown to join as well. The new disc is a collection of updated songs from No Man’s Land and Journey, as well as some new songs and covers of Leonard Cohen’s “Future” and the Animals’ “Don’t Let Me Be Misunderstood.” Considering that these guys are now in their late 60s/early 70s they can still really rock. The songs are Viagra laced hard rock songs. Arthur does not sing on all of the tunes, but when he does, hold on to your seat. These are the best times on the album. I especially like his current renditions of “I Put a Spell on You” and “Time Captives.”

There is also a companion DVD that contains five videos, four of which were recently recorded versions of “We Only Come to Help You,” “Empires of Steel,” “Time Captives,” and “Demon of Love.” The fifth is a short MTV video/interview from the 70s, which considering this must have been one of the first MTV productions, it is pretty lo-res and amateurish. I’m not real sure why this was included. It is difficult to determine if the other four videos were recorded in front of an audience or just in a sound studio. These are multi-media performances with video images, lasers, smoke machines, etc., but no applause or cheering. It is kind of creepy watching these old guys jump around the stage looking like glam rockers in satin capes. The lead guitarist has his shirt opened all the way down, at least he doesn’t have a flabby stomach! Arthur Brown only sings on “Time Captives” and he is not even physically present. His image is superimposed over the band. And he is the only one who looks comfortable in the mystical robes, more in line with his age.

Bottom line is if you buy this CD, don’t even consider viewing the DVD. The CD is great and maintains the illusion that the band is still in their prime.

Scenes - Call Us Now at the Number You Provide – Swedish prog metal protagonists Scenes are not a well known commodity on the international scene yet but they are making substantial inroads in that direction with this first label release. The...  (2006) » Read more