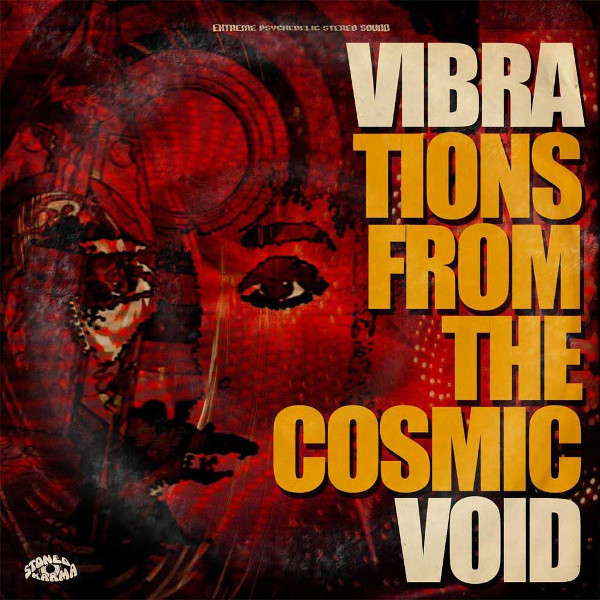 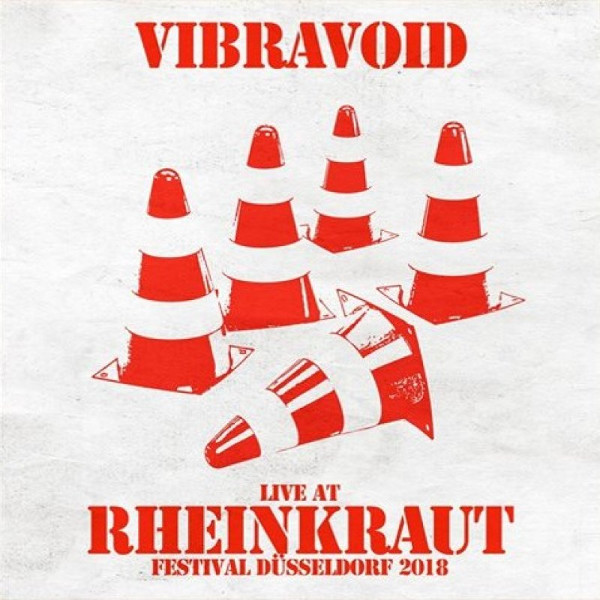 It is always a pleasure to listen to a new release from the fertile mind of the prolific Christian Koch, AKA Vibravoid. Over the past 30 years he has released more than 100 LPs, singles, EPs, etc., many of them on Fruits der Mer Records. In late 2017 he released Mushroom Mantras and this May, two more albums, Vibrations from the Cosmic Void and the double album Live at Rheinkraut Festival. Plus, before the release of these two new albums, Vibravoid has released an innovative and visually psychedelic vinyl kinetic Op Art single, "Timemazine Woman," which is not reviewed here. Apparently Christian is not through with exploring Indian music and integrating it into Krautrock as the two new albums extend what he produced on Mushroom Mantras. Vibrations from the Cosmic Void contains five tracks, plus the CD includes two bonus tracks, with two tracks from the entire set topping out at 20 minutes. The relatively short title track opens the album with mid-Eastern tinged psych to be followed by “The Modular System” and its pulsating motorik beat that conjures images of 60s - 70s European spy movies. “Melodies of the Stars” is the first vocal track (in German), which focuses much more on the music. The music is primarily trance-inducing with a repetitive mantra vibe. The next is the 20-minute “The Intergalactic Playground” with fuzzed pulsating electronics, tamboura-like drones, and electric sitar creating a trippy blend of raga rock and Krautrock. In the middle, during a quiet abstract break, an eerie Mellotron flute enters over the drones. Then the piece races to a climax with bubbly analog synth sequences, sitar, tabla, and Mellotron, which all segues into the two minute “Frequencies of the Cosmos.” The first bonus track, “Mirrorspace,” is another 20 minutes of slow raga rock with tamboura drones, exploding electronic noise bursts, echoed guitar, and processed cymbals. The music gently flows and evolves, all underpinned by the drones. The closing track, “Milchstrasse 14, Köln,” which may be the Köln address of the Stoned Karma studio. This closing track is a wonderful Krautrock jam of abstract electronics laid over a foundation of rapidly throbbing bass and percussion riff.

Vibravoid is known for their intense, extended, and sometimes unpredictable live performances. The second double CD set is from the first of many Rheinkraut Festivals scheduled for 2018 in Düsseldorf. Since these festivals are promoted by Stoned Karma, Vibravoid headlined the first on February 16, 2018 with their entire performance on the album. There are only two tracks presented, one on each disk (“Your Mind Is at Ease” and “Ballspeaker’), for an impressive set of nearly two hours of music! I find it difficult to wrap my head around the fact they were physically able to play non-stop for this amount of time. Both tunes are greatly extended versions from Vibravoid’s catalog that they have also performed live. The new version of “Your Mind Is at Ease” lasts 47 minutes, the original was on their 2008 album Politics of Ecstasy (22:34) and a live version on the 2010 Burg Herzburg Festival live album (11:52). This new live version begins with a two-note drone that runs throughout the entire performance. Slowly, different instruments enter starting with a sitar, then drums, bass, and guitar that develops into the song. Then Vibravoid's jamming takes you on a mind journey through different realms, one of which reminds me of Lothar and the Hand People’s “Standing on the Moon.” Eventually they brings you back down to Earth and slowly fade to the two-note drone to end the performance. And then they launch into the epic psychedelic / cosmic / Krautrock jam “Ballspeaker” clocking in at a massive 70 minutes! “Ballspeaker” is from their 2001 album “2001” at the paltry, in comparison, 7:24. Vibravoid has also performed “Ballspeaker” at least twice at the Burg Herzburg Festivals, in 2010 (19:12) and in 2011 (16:17). Before spinning the disc, I was apprehensive that Vibravoid could sustain my attention for 70 minutes, but they pulled it off! “Ballspeaker” begins with a reverbed guitar sent through a delay, plus bass, percussion, and electronics. There is a lot of rhythmic scraping of guitar strings and great bass work that distinguishes this extended version from Christian’s recent fascination with Indian music. Basically “Ballspeaker” can be thought of as combination of two songs. The first is an extended version of “Ballspeaker” lasting roughly 38 minutes that seamlessly morphs into their cover of Can’s “Mother Sky” that they riff on for the next 30 minutes or so, flirting with Pink Floyd’s “Interstellar Overdrive” and “A Saucerful of Secrets,” plus a little bit of “Peter Gunn.” And then they tie both sections together to end the performance. It will definitely take a dedicated listener to make it all the way through the performance, but you will not be disappointed!

Seems like I was just writing a review of their previous studio effort Mushroom Mantras a few weeks ago — it was in fact February of this year — but the point is that Vibravoid is unstoppable: in their 30 years as a recording entity, they have over 100 releases to their credit, counting CDs, LPs, 7” vinyl singles, everything. In the telescope tonight (or under the microscope if you prefer) are the band’s two latest releases, the full length 69-minute studio CD Vibrations from the Cosmic Void (which is also available as a vinyl LP minus the last two tracks), and the companion two-disc live set Live at Rheinkraut Festival, Dusseldorf 2018.

The studio set begins with “Vibrations from the Cosmic Void, Part II” (not sure where part I is, that must be on one of the 80 releases I haven’t heard!), which together with “The Modular System” and “Melodies of the Stars” male up the first album side, a seamless continuum of psychedelic rock such that you may not notice where one track ends and the next begins unless you are watching the track counter. Distorted guitars, bass and drums, distorted (though understandable) vocals and dweedly electronic sounds and to a lesser extent keyboards are the modus operandi: find a grooving psych riff, work it to its extremities, change it a little here and there to keep things interesting, and stop when you get to the length of an LP side, stop for a smoke or another hit of windowpane. As the side progresses the whole of the sound becomes engulfed in a swirling miasma of effects, and the vocals become more and more unintelligible. The second side continues with “The Cosmic Playground” and “Frequencies of the Cosmos,” starting out with some pulsing electronics and droning sitar sounds looping with tabla, the lead guitar enters with the sitar treatment while the bass keeps the groove going, but almost without notice by the six minute mark we are suspended in a saucerful of trippy swirling effects when the flute sound steps in and makes a lengthy, wandering melodic statement, and for my money represents the best moments of the entire studio disc. But everything tends to overstay its welcome, and by the end of the LP proper it’s all starting to get a little tiresome. Then comes the first of the two bonus tracks, “Mirrorspace,” where a three-minute idea has been stretched out to a full twenty minutes. The six-minute closer “Milchstrasse 14, Koln” fares much better as a more succinct statement.

The two disc live album, even though far longer than the studio disc, fares better simply because it’s the real deal, the trio performing in a live setting, feeding off a very receptive audience, with less of the type of gimmickry found on the studio disc (although they still have their sitar droning machine in play, like a fourth band member). Each disc represents a single track: “Your Mind Is at Ease” covers a mere 47 minutes, while the second disc is “Ballspeaker,” approaching the 71 minute mark. Yes, these can get a little tiring attimes too, but they tend to drive a more real path and remain vital over their duration. After all, these are open-ended psychedelic jams, that go on and on; one needs to be in the correct frame of mind before the approach. But for my money, Live at Rheinkraut is more engaging than the studio disc, although both have many great moments.

Kräldjursanstalten - Voodoo Boogie / Nu Är Det Allvar!! – Have the Excedrin bottle handy for this one. Actually it's not that bad, and in fact starts to reveal itself after a few listens as being pretty innovative and unique. But the shouted punky...  (1997) » Read more

Rapoon - The Fires of the Borderlands – Take a simple repeating ascending pattern of three notes and run it through a dense whirlwind of heavy processing, changing patterns and directions from time to time, and one might get a rough idea of...  (1998) » Read more