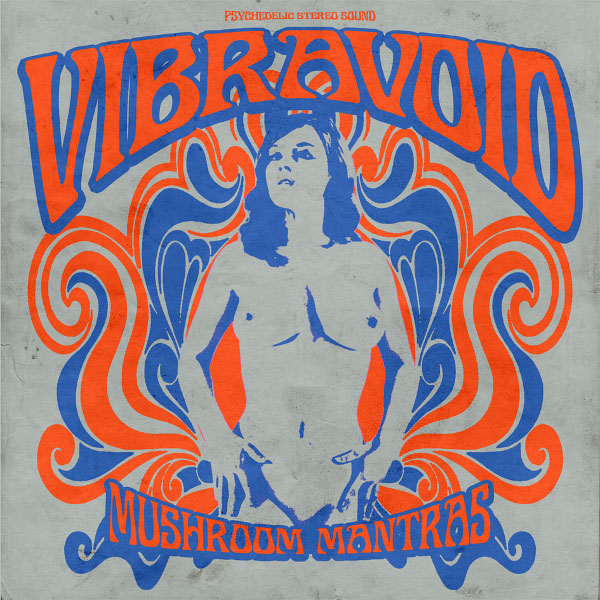 Vibravoid. Even their name by itself sounds psychedelic, and if that’s what you are looking for you’ve definitely come to the right place. From Düsseldorf, they are a trio led by guitarist Christian Koch, along with a drummer and bassist, and although the liner notes are long on verbiage about each of the songs, they are lean on credits, so the bassist and drummer are more or less anonymous (even their website and Facebook offer no clues), and even less the credits for sitar, organ, mellotron, theremin and other vintage trippy sonic embelishments that permeate their music. One thing is certain, the seven tracks of the album proper (the CD version has three bonus tracks, we’ll get to those later) are extremely dense and multi-layered, certainly more than three guys could do without studio overdubs. The opening track is “Om Gang Ganpataye Namah,” which reveals their strongest influence, which is late 60s Pink Floyd, centereed squarely on A Saucerful of Secrets. I swear they got this organ from the late Rick Wright — the sound is so close it’s unbelievable. The harder rocking pieces like “Doctor Robert” sound like the heavier rock pieces from More, with sitar added for good measure, hinting at some of the Beatles off-center songs from the Magical Mystery Tour period, but with more of a garage attitude (Electric Prunes from their first couple albums could have done this also). An everpresent swirling psychedelic fog and dweedly vintage oscillators and theremin create a cauldron of sound that obscures the vocals somewhat, but certainly that’s the point, to make this sound as vintage as possible. The first five tracks are more succinct, mostly with vocals, but “Purple Pepper” and and especially “The Orange Coat” at close to twenty minutes, offer the band an opportunity to stretch out even more, as the piece builds slowly.

Now for the CD version, there are three additional tracks titled “Krautfaktor 1, 2 and 3” that the band recorded way back in 1992, not long after they formed, attempting to create the kind of Kosmische Music pioneered by their heroes. These three cuts are very different from the others preceeding them on the disc, taking on a more mechanical and droney repetitive sound without as much development, sometimes stretching out to the limits of tolerance; think Kraftwerk on their first two albums, or like that. Interesting, but nothing that will overshadow the main course. Overall, not that groundbreaking, but might cause spontaneous hallucinations nonetheless. if you always wished that Floyd would have made another album in 1968, Mushroom Mantras is your ticket.

I first encountered Vibravoid about 10 years ago, I think from a YouTube video, but I cannot be sure. I rapidly discovered that no one in the US carried any of their releases, causing me to explore locations in Europe, which led me to Fruits de Mer records, barely a year old at the time. They had just released Vibravoid’s Krautrock Sensation EP with covers of Kraftwerk’s “Ruckzuck,” Amon Düül II’s “Eye Shaking King,” Can’s “Mother Sky,” and Mashantra’s “Rauchkraut.” I was hooked, and over the past decade the prolific Vibravoid has continued to produce incredible trippy psychedelic progressive Krautrock jams both in the studio and playing live, never shying away from challenges. They’ve covered Eddie Cochrane’s “Shotgun Wedding Theme,” Pink Floyd, and even Iron Butterfly’s “In-A-Gadda-Da-Vida.” So I have been eagerly waiting to hear and review their latest effort Mushroom Mantras. This time around Christian and mates have produced ten different psychedelic mantras, with two of them running on for 20 minutes, opening up a whole new musical realm for Vibravoid. The disc opens with an Indian religious mantra to the elephant god Ganesh “Om Gang Ganpataye Namah.” You can find some YouTube videos of this mantra, a sedate and slow chant that can last up to 36 minutes. What Vibravoid has done is taken this mantra, mixed in some shrooms, sitar, and Krautrock to create drugged-out psych masterpiece lasting four and a half minutes. The Hindi mantra is mixed with English lyrics and a couple of outbursts of “Mushrooms!” The second song “Legend of Doctor Robert” is a four minute trippy psych mantra with reversed tapes, sitar, and echoed and reverbed vocals. “Echoes of Time” is a crazed psych jam with fuzzed guitars. Then we have the Indian peace mantra “Sarveshaam Svastir Bhavatu,” which is usually slow and sedate. If you remember back to the tribute Concert for George Harrison in 2003, the concert opens with this peaceful mantra. But not for Vibravoid! Trippy guitar effects, sitar, and heavy doses of psych make for another blissful mind trip. Track five is their first instrumental, “Apollo69,” with fuzzed sitar, swooping electronics, and glorious washes of sonic colors. “Purple Pepper” dials things back a couple of notches for a floating and dreamy journey with a fuzzed tremolo guitar. With “The Orange Coat,” they brin us chirping birds, sitar, and drones to create a masterpiece of Krautrock laced raga rock. There is a bit of Popol Vuh in here along with Jerry Garcia’s “Dark Star.” This circular music continues for roughly ten minutes before the vocals enter and eventually an electronic tabla rhythm to round out this 20 minute meditative piece. As I listened, I wondered what it would be like for Vibravoid and Acid Mothers Temple to collaborate. That would be very interesting! And the disk ends with the three-part “Krautfaktor.” Each part is different. Part I is calm cyclic washes of sound. Part II is a 21 minute extended drone instrumental that at times recalls Harmonia, but mostly Faust’s collaboration with Tony Conrad on Outside the Dream Syndicate. And Part III, that closes the disc, is an eerie experimental track with prepared piano and a distorted rumbling bass synth. Mushroom Mantras is definitely a new direction for the band, but one that is sure to please their fan base.

Banda Elástica - Los Awakates de Nepantla – I haven't much music coming from across the border recently. However, we are very lucky that Banda Elástica managed to record their third album before the peso crashed. Los Awakates...  (1995) » Read more

Ivanhoe - Symbols of Time – Ivanhoe represent the harder side of neo-prog. That is to say, they incorporate keyboards, a big guitar sound, and dramatic lyrics. On first listen to this album, I whooped with delight as I heard...  (1996) » Read more

New Cars - It's Alive! – Reunion incantations of classic acts have been part of the rock and roll roadmap since the 50s. Only rarely does a group eclipse the live persona of its original instance. Todd Rundgren had been...  (2007) » Read more

Steve Hackett - Feedback 86 – It just doesn’t get much worse than "Prizefighters." I remember when GTR introduced this song during their only tour, I disliked it then and this version is worse. Take one guitar...  (2001) » Read more