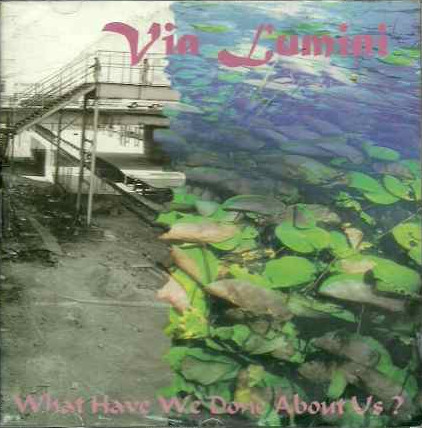 For their long-anticipated second album, the band took what may appear to some as a step backward, not forward, with the addition of Hammond B3 organ to the keyboard arsenal (and it gets a lot of usage here). And the change from Portuguese lyrics to English does not bode well. But I personally prefer this over their first. Perhaps it's because of the addition of the Hammond, or of flute-player Silvio de Oliveira as a full-time member of the band. Though there's obviously more of a 70s influence, and less of the neo-ish feel of the debut, one would definitely not mistake this for a 70s release. I do know the vocals (by producer João Kurk, not listed as an actual member) do fit into the band better than those by the original singer. A pleasant diversion, not especially challenging, but certainly worthwhile.

Singer and producer João Kurk is listed in the credits simply as a 'Special Guest,' while the five instrumentalists (B3+piano+synth, guitars, drums, bass, and flute) comprise the band proper. From São Paulo, their sound is an original blend of accessible UK early progressive and light jazz-rock. Compositionally, one may be occasionally reminded of early (pre-Wakeman) Yes, Gentle Giant, and bands like Cressida, Kestrel, and so on, but their sound is clearly of the 90s. The keyboards (mostly Hammond and piano) and flute really make the difference here, two elements that keep their material interesting, despite its apparent simplicity. Kurk's voice can be very mainstream sounding, and may put the listener off initially, but if one can weather the first few tracks, the disc picks up fire as it goes along. By the fusion instrumental "Fast Feet" at the mid-point, the album has taken on a very different character, even Kurk's voice changes to meet the music on a more equal footing. All taken, along with Dogma's Twin Sunrise, Via Lumini is probably one of the better releases from Brazil last year.