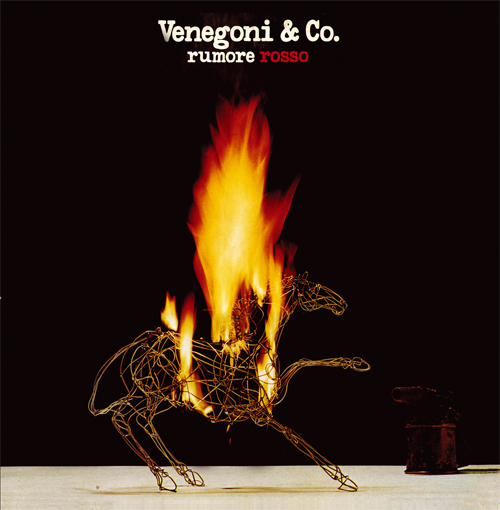 Arti e Mestieri's original guitarist, Gigi Venegoni put his own band together and released two albums in '77 and '79, both on the Cramps Label. The first of these was Rumore Rosso, a more fluid, guitar based approach in combination with certain jazz-rock elements, fusing it with ethnic color, folk, and experimentalism. Using a five-piece lineup of electric and acoustic guitars, keys/percussion, bass, drums, and vocals/percussion, the album carries a good deal of variety, yet remains quite cohesive and focused. Venturing into more funky territory at times, like classic period Kraan, there are many other strong influences at work here also. Some of the album's ten tracks feature vocals, but they don't seem a prominent part in the overall scheme, instead merely adding more variety to the sound. In short, I can't recommend this one highly enough.

Although this band was led by a guitarist, Luigi Venegoni of Arti & Mestieri, it is far from a guitarist showoff exercise, but a very balanced group effort. Keyboards, handled by Ludovico Einaudi and Luca Francesconi, are very prominent, with electric piano especially noticeable. And in fact the group I’m most reminded of here is Weather Report in their early days, from Mysterious Traveler to Black Market or so, only with electric guitar. Guest players on sax heighten the comparison. The grooves are loose and a bit funky, the melodies float along above them, and wah-wah-enhanced electric piano fills in the background. As those familiar with A&M know, Venegoni is a guitarist with a fluid tone and imaginative choices of notes, technically good but not prone to showy lightning-fast slurries of notes. The jazzier setting of this band suits him well, and lovers of jazz should find this as enjoyable as A&M fans. The vocals are a bit on the odd side (remember the singing in Weather Report?), but not annoying, and only show up on a few tracks in any case. For this release, a live version of the opening track “Coesione” is added, and it’s an interesting contrast to the studio version, longer and with more prominent guitar.