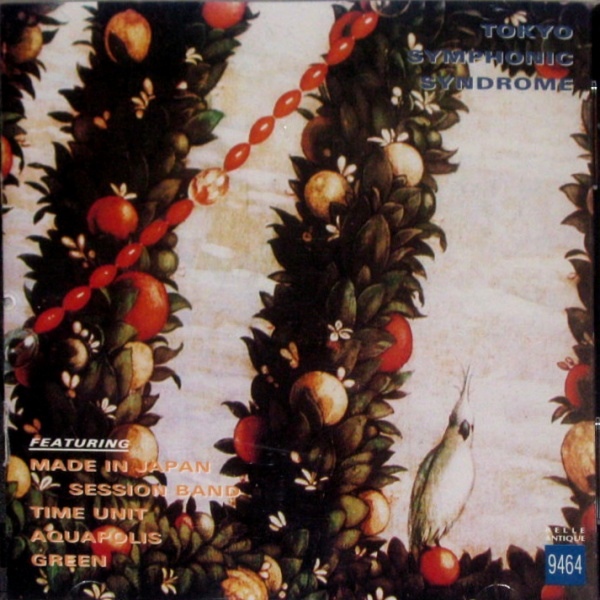 Japanese progressive compilations are always an interesting listen, and this one's no exception — a collection of groups that never made an album but performed live in Tokyo in what sounds like the early 80s. The Made in Japan Session band is up first, with their "Babylonia," a lush and rich symphonic track that immediately moves into high gear with a brilliant Kit Watkins like keys solo. Moving through upbeat and mellow phases, this is a great way to start off this collection — dynamic emotional, and compelling. Time Unit's track "The Clap" starts out with a Crimson like feel — similar in style to bands like Bi Kyo Ran, Arachnoid, or Shylock, with picked angular chords over a solid rhythm base. This long track shows Crimson influence in various ways, especially in the Larks' Tongues era, and moves in various phases from driving Ain Soph like jams to mellow atmospheric parts. This one grows on you over listens. Aquapolis' self titled suite is the compilation's gem, although unfortunately the sound quality gets a bit hissy throughout it. While it almost sounds like it was pieced together posthumously, the 15 minutes works well as a suite. This is a very picturesque track, one of the most lush and vivid I have heard. The bubbling, twittering intro is very effective, giving a very good underwater impression. The music moves from spacey to upbeat back to Vangelis like melodic synth over its course, and it works great. I'd like to hear more by this group. Green's "Miyako" is possibly a distillation of the previous three into five or six minutes, a dense web of progressive with a decidedly Italian flavor to it similar to Kenso — complex, innovative, and surprising.

The Japanese symphonic rock scene didn't really pick up steam until the mid-80s, at least as far as record releases were concerned. Numerous bands existed prior to that time but were generally ignored by the Japanese labels, many releasing only demo tapes or flexi-discs. A few of the uncompromising outfits (like Shingetsu, for example) were picked up by majors, but quickly dropped when their albums didn't sell well, while others, like Novela, had to moderate their albums with more commercially viable material. The CD release Tokyo Symphonic Syndrome on Belle Antique attempts to document the studio recordings of four of Tokyo's most uncompromising bands who never made it to a proper album release. The Made In Japan session band is first up, a four-piece featuring members of Outer Limits and two other bands in a special studio side-project from 1981, and the only track on this compilation featuring vocals. Next up is Time Unit, featuring Takeshi Naganuma who would later go on to Lacrymosa and Golden Avant Garde; their contribution, the heavily Crimson influenced "The Clap" was originally released on a flexi in 1982. Aquapolis offers their "Aquapolis Suite," a sixteen-minute epic from mid-1981 that has never seen release in any form until now. Likewise with Green, offering the collection's shortest track at six minutes, "Miyako" exhibits a high degree of originality, fusing intense ELP like keyboards with an almost-Magma-esque rhythm section. Since most of the material here was taken from old tapes or flexis, the sound quality tends to be a little substandard, but is more than made up for by the inspired performances.

Mathew Shipp Duo with William Parker - DNA – Mathew Shipp has paid his dues in the eastern US jazz circles for the past several years and DNA is his first for Thirsty Ear Records out of New York. Two traditional pieces are included on the disc...  (1999) » Read more

Various Artists - Analogy, Volume 1 – Listeners who doubt the fact that the majority of music which is made with analog synthesizers sounds mysterious and fathomed, should listen to this album. Several musicians from the Dutch EM-forum...  (2006) » Read more

NR Hills - Eleven Nails in the Coffin – These pieces originally appeared on English composer and musician N.R. Hill’s first three (now deleted) albums: Romeo & the Beast, Nails, and The Triumph of Death. With this compilation he...  (2008) » Read more

Salle Gaveau - Alloy – A new French band, right? Not exactly, although this Japanese quintet of guitar, piano, violin, accordion and contrabass could give many a European folk-jazz-RIO band a surprisingly good challenge...  (2008) » Read more

Jasun Martz - The Pillory - The Battle – This 2-CD set is supposed to be a sequel to Martz’s original Pillory album, which I have not heard (anyone want to send me a copy?). This ambitious undertaking, split into the CDs “The...  (2005) » Read more