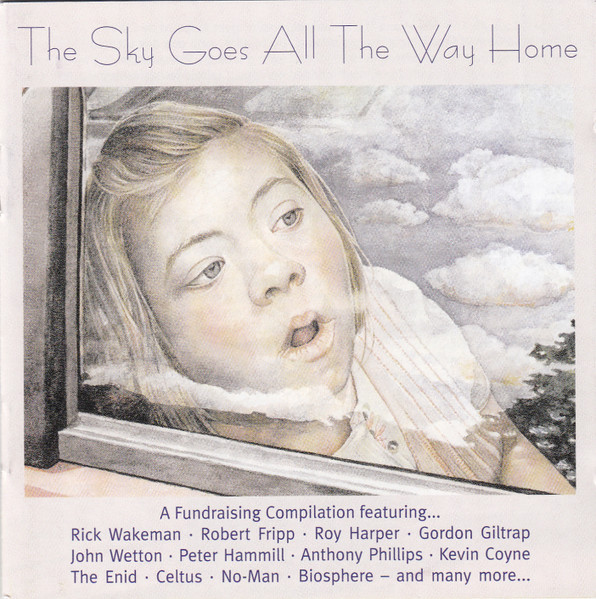 I'm always amazed at the outpouring of perceived "stingy" artists who rally around children in need. Ashley Franklin performed a great deal of groundwork gathering many notable UK super talents to donate tracks to this two CD special compilation, The Sky Goes All the Way Home. The album's title and main theme is derived from Downs syndrome girl Claire Milford's spoken phrase. Rick Wakeman delivered two pieces, the first being a heavy organ and guitar-driven track entitled "Hymn of Hope" and the reflective piano piece, "A Little Piece of Heaven." Peter Hammill's track is "Far Flung (Across the Sky)," which is one of his best individual songs on this or any of his recent albums. Cipher and Steve Wilson's No-man present more challenging tracks, which combine subtle ethnic and ambient elements. Less familiar artists with notable offerings include the lead track from Robert de Fresnes, "Claire's Dream" which uses Claire's spoken word sample. Father-and-son contributions come from Roy and Nick Harper with two separate tracks, "Solar Wind Sculptures" (a somber ballad) and the title track. Gordon Giltrap provides a short almost etude-like guitar piece with minimal accompaniment, while Anthony Phillips renders another precious twelve string jewel. Probably the most contrasting piece on the album comes from Kevin Coyne's "I Believe It" if only for his carefree folksy delivery. Lastly, John Wetton and Robert Fripp each present a track: Wetton's being the more classical bent "Adaggietto," while Fripp's "The Sky Falls" uses his now trademark sound-wash system. The album is a sure fire collectable if only for the diverse set of artists.