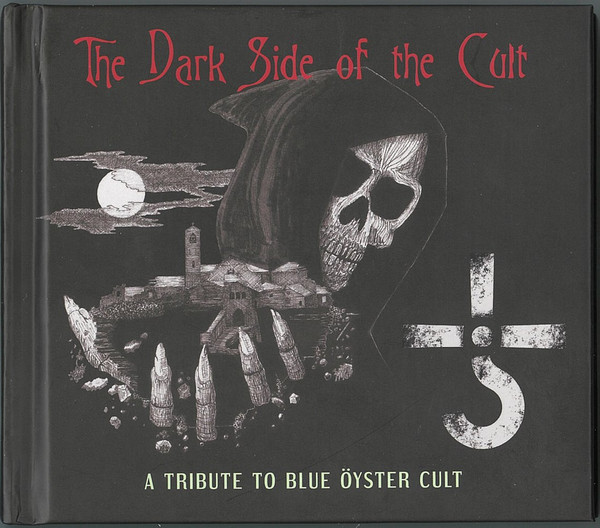 Over 50 years ago a group of New Yorkers in Stony Brook, Long Island got together to form the hard rock band Blue Öyster Cult. They sold 25 million records worldwide. Back in the day, this was a band that never interested me, the only song I remember is their hit “(Don’t Fear) The Reaper,” that I felt was overplayed on the radio. Fast forward to 2022 and Italian producer and Blue Öyster Cult fan Giancarlo Bolther, along with Black Widow Records, pulled together a compilation double CD of Blue Öyster Cult covers, but not what you would consider a typical tribute album. Giancarlo’s aim was to create a gothic and dark compilation with a progressive rock touch. Focusing on the Blue Öyster Cult’s “black and white” trilogy, which is considered to be their most creative period, as well as songs up to The Symbol Remains, he pulled together a variety of bands and even Blue Öyster Cult’s Albert Bouchard  to record 29 cover songs. Most of the bands are new to me, with Sophya Baccini’s Presence, Witchwood, Blue Dawn, Il Segno del Commando, Freddy Delirio and the Phantoms, The Mugshots, and Runaway Totam having graced our pages in the past. This compilation was a labor of love and dedicated to the memory of Claudio Alberti, Allen Lanier, and Sandy Pearlman.

Unfortunately for me, being entirely unfamiliar with Blue Öyster Cult’s music, except for “(Don’t Fear) The Reaper,” I have nothing to judge the 28 of the 29 covers against. So I am left with reviewing each song on face value. The result being that only about 50% of the songs had any interest for me, the rest being boring heavy metal / hard rock / bump-and-grind stripper music, much like Mötley Crüe and Bon Jovi. Highlights for me include Sophya Baccini’s cover of “Before the Kiss a Recap,” Bullfrog’s version of “Dominance and Submission,” Witchwood’s “Flaming Telephaths,” Blue Dawn’s “Astronomy,” Simon Baldini and Christian Roversi’s “Then Came the Last Days of May,” The Forty Days’ cover of the seminal “(Don’t Fear) The Reaper,” Il Segno del Commando’s “The Revenge of Vera Gemini,” Lifestream’s “Death Valley Nights,” Gothic Stone’s “Nosferatu,” the excellent Doctors of Space (Øresund Space Callective) cover of “The Vigil,” Ottone Pesante’s outstanding version of “Monsters,” The Mugshots’ “Veteran of the Psychic Wars,” The Lancasters’ take on “Demon’s Kiss,” Runaway Totem’s slow burn “The Alchemist,” and the closing track, “Godzilla” played by Death SS. If you are a Blue Öyster Cult fan, you most likely will fall in love with this tribute album. Those unfamiliar with the band, like me, will have mixed feelings.