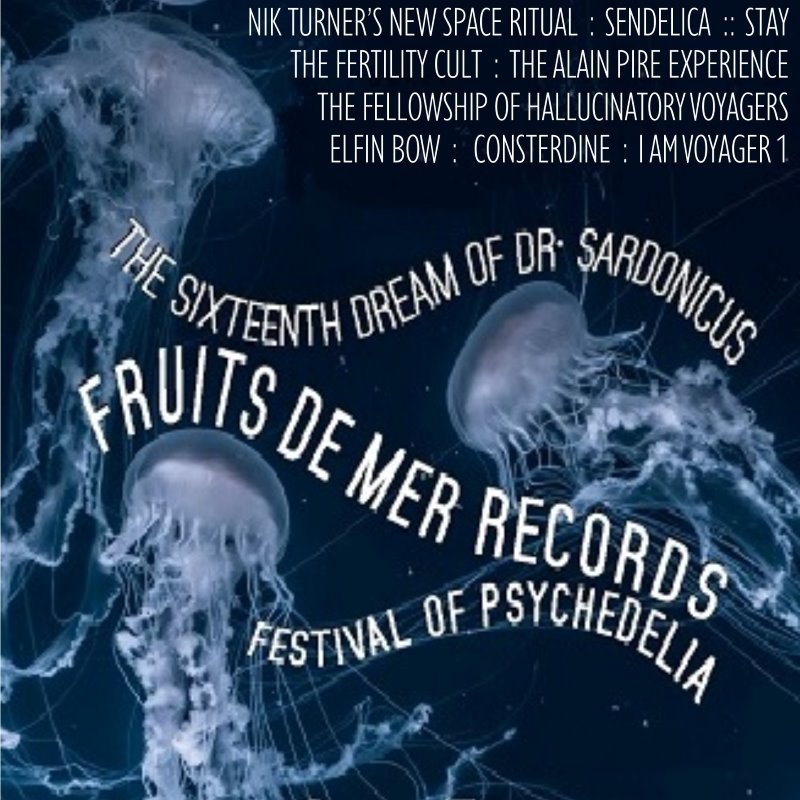 Starting back in 2015 with the 13th Dream of Dr. Sardonicus Festival, Fruits de Mer Records has been presenting an annual festival of musicians and bands who have been, currently are, or soon will be featured on the label. And then roughly nine to twelve months later, they release a Various Artists compilation of festival highlights. Last year’s festival, the 16th Dream, occured August 3 - 5, 2018 in Cardigan, Wales. The three-day festival included performances by: Nik Turner’s New Space Ritual, Fuchsia, Sendelica, Stay, Schnauser, The Fertility Cult, Elfin Bow, Nathan Hall and the Sinister Locals, 7 Shades, Opel, Alain Pire Experience, Fellowship of Hallucinatory Voyagers, Ash Magna, Consterdine, I Am Voyager 1, and The Cold Needles. Everything was recorded, but unfortunately not everything went as planned, resulting in only a selection of tracks worthy of being released on vinyl. So this year’s double LP release contains tracks by Elfin Bow, I Am Voyager 1, Stay, Consterdine, Fellow of Hallucinatory Voyagers, The Alain Pire Experience, Sendelica, The Fertility Cult, and Nik Turner’s New Space Ritual. The concert album opens with FdM newcomer Elfin Bow and her exquisite reading of Sandy Denny’s “Who Knows Where the Time Goes.” Elfin Bow’s version is a stripped down, slow electric guitar accompaniment to her beautiful voice. The next track is an original Elfin Bow song “Grimshaw and the Finger Claw,” an excellent British acid folk song on acoustic instruments. And just when you are lulled into bliss by Elfin Bow’s bucolic visions, I Am Voyager 1 takes you on their fantastical cosmic journey “Songbird.” A definite shock to the system, but evoking a WOW experience! The next two songs are Stay’s cover of Neil Young’s “Old Man” and Buffalo Springfield’s “Rock ’n’ Roll Woman.” These are decent covers and they clearly demonstrate that these songs can stand by themselves without Neil Young’s annoying falsetto. Consterdine then follows with “A Spell for Leonard” powered by a throbbing bass and analog synths. This slow and quiet instrumental slowly disintegrates after about four minutes into amorphous ambience the slowly coalesces, just to fade away into the ether. The Fellowship of Hallucinatory Voyagers then treats us to a peaceful floating psych journey with birdsong and thunderstorms, “Moonlight Moorings.” There is something annoyingly familiar about this instrumental that is driving me crazy, but I cannot put my finger on it. Needless to day, “Moonlight Moorings” is one of the highlights of this album. Then disc 1 closes with The Alain Pire Experience and their trippy psychedelic tremelo guitar bridge on “Drifting South.” Side 2 kicks off with Sendelica’s “BS” from Chromlech Chronicles III, followed by their fantastic extended cover of George Clinton’s Funkadelics “Maggot Brain.” These are another two tracks that are well worth the price of the record. Then we take a quantum leap over to the cosmic Krautrock musings of The Fertility Cult’s “Cosmic Kaishakunin’” And the second disc wraps up with two tracks from Nik Turner’s New Space Ritual, Hawkwind’s “Steppenwolf” and Space Ritual’s “Walking Backwards.” This is another fine release from our friends at Fruits de Mer Records!