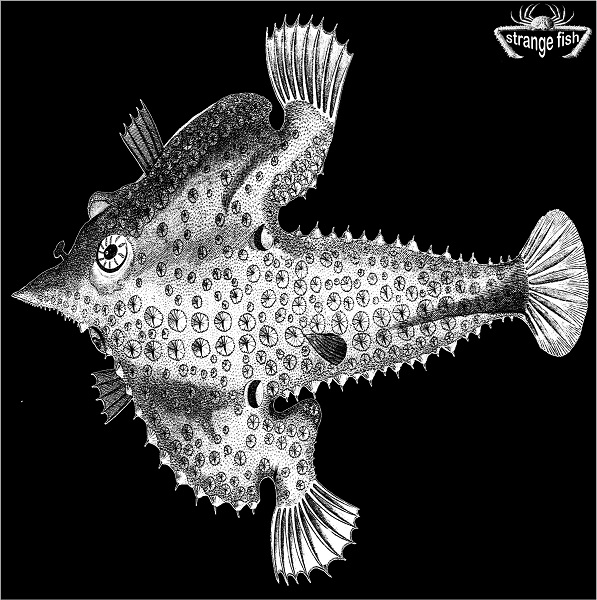 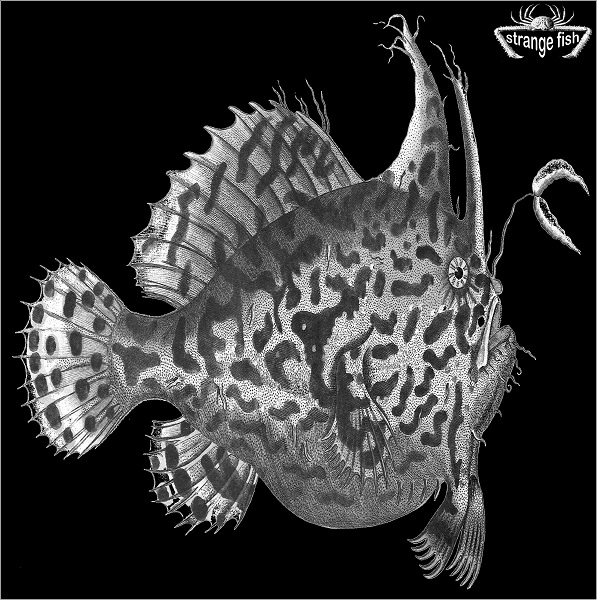 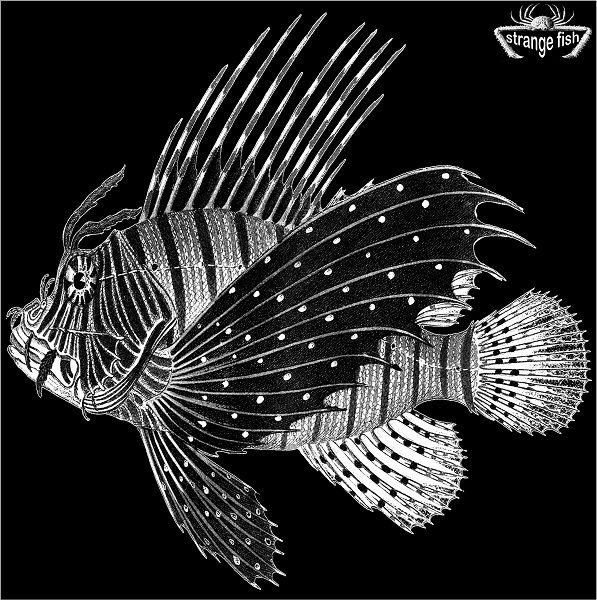 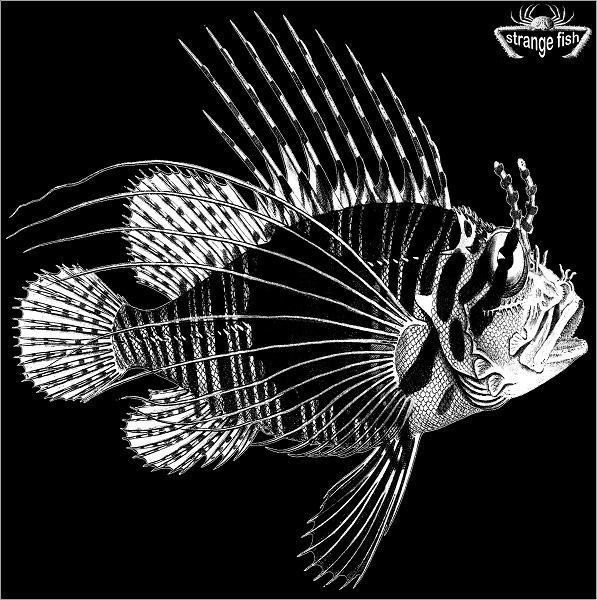 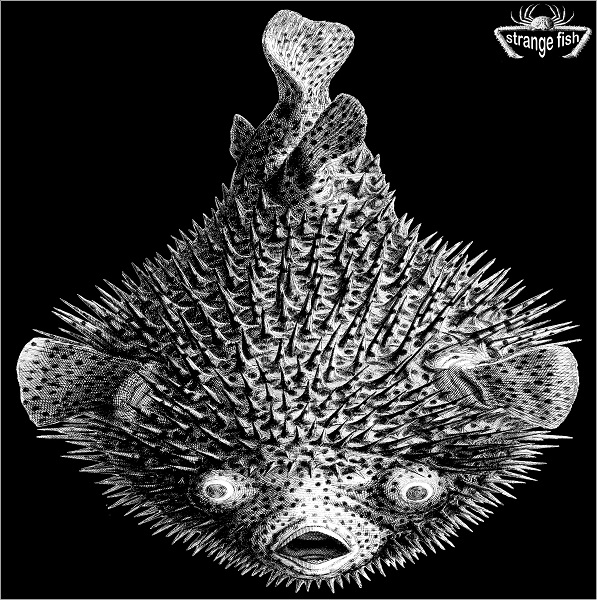 In their never ending quest to plumb the nether reaches of the sea of neo-psychedelia and neo-Krautrock, the fine folk at Fruits de Mer have just released a new series of original, instrumental tracks, inspired by Krautrock, kosmische music motoric beats, progressive rock, acid-jams, minimalist, and ambient music. This new series is a departure from the usual covers of obscure jems. This massive set of vinyl and a CD features many of the contributors to Fruits de Mer releases along with some new names. Plus each volume has a different theme.

Strange Fish One is an LP of one artist per side of ambient synth, sequencer, and guitar muisc. Side one is devoted to two long tracks by Craig Padilla and side two is a 24 minute track by Sendelica. Padilla is an electronic musician who has been active for over 20 years, working in TV, theater, and film productions. This is his first FdM outing and using his arsenal of analog synths, sequencers, etc. Padilla provides some very nice floating electronics, Mellotron, and so on, reminiscent at times of Klaus Schulze. Sendelica need no introduction, as they have been part of FdM since its inception. And as it was true in the 70s and 80s, it does take a bit of patience and perseverance to make it through the music.

The theme for the Strange Fish Two double LP is Krautrock and progressive rock guitar-led music. Side one opens with a track by Moonweevil, who previously appeared on FdM’s Hollies Re-Evolution tribute last Spring. Next is a track by Vespero, another of the FdM artists appearing on earlier releases. And closing side one is a track by Organic Is Orgasmic, a new FdM band playing a combination of jazz and new age for some nice background music. Side two is another piece by Sendelica with long slow guitar chords and an obvious reference to Robin Trower’s “Bridge of Sighs,” followed by a tracks by Temple Music and The Grand Astoria, who have appeared on several FdM releases including Head Music and Roqueting through Space. The Grand Astoria track, “Space Orchid vs. Massive Drumkit,” takes a while to build momentum from its initial chord strumming to finish with a lot of energy. Side three contains tracks by Cat Frequency (UK psych band) and Julie’s Haircut (very odd name for this Italian band), both new FdM bands. The Cat Frequency track is quiet and mysterious, ending with pentatonic sequences ala Tangerine Dream. Side four is dedicated to three tracks by Mechanik, a new Spanish band from Madrid. The first track “Kwangmyongsong” starts off slow and finally after four minutes it all comes together.

It isn’t until Strange Fish Three that the music kicks into gear. This volume is centered on kosmische music, motoric beats, and sequencer-driven music. Side one consists of tracks by Palace of Swords, Zenith: Unto the Stars, and Earthling Society, all long term FdM contributors. This is great music, lots of interesting things happening, and the tracks are just too short! Side two contains tracks by Dead Pylons, The Golden Cake Company, and one more track by Palace of Swords. The Dead Pylons and The Golden Cake Company are new Brit bands, with the Cake Company’s track having a strong Klaus Schulze vibe. Side three contains another Cake Company track, and three tracks by Vert:x who have appeared on FdM’s The Crabs Freak Out and Roqueting through Space. Vert:x’s “Bad Calibration” is a great Neu!-inspired track. Side four closes this volume with one track by Black Tempest and another by FdM long-timer Frobisher Neck. Black Tempest previously appeared on FdM’s Head Music with an outstanding cover of Klaus Schulze’s “Bayreuth Return.” Now they present the 14 minute “Energy of Stars.” The closing track “Underwater Starblob” is seven minutes of pure bliss calling to mind Harmonia and Popol Vuh.

Having made it this far is Strange Fish Four, a single LP of acoustic guitar and ambient electronics. Side one contains one track by Cat Frequency, two by Organic Is Orgasmic, two by Zenith: Unto the Stars, and one track by The Vox Humana. The Organic tracks are outstanding and very different. “Chinese Horoscope” sounds like it could have been on Neu! 75 and “Lifeless Void” is firmly in the kosmische music camp. The other outstanding track is Vox Humana’s “Shortwave Radio and the Ionosphere.” Side two opens with four tracks by James McKeown, who is also involved with long time FdM contributors Hi-Fiction Science and the Dead Pylons. These cosmic acoustic tracks are followed by Temple Music’s “Dreaming of Flying East,” an excellent track of Popol Vuh meeting Harmonia, and the closing melodic synth track “Spirals” by the Bordellos, an FdM band first appearing on FdM’s 2012 Annual.

For purchasers of the four volumes, FdM also included a bonus CD of additional tracks by Elevation, Jay Tausig, The Golden Cake Company, The Cream People, Mademoiselle Marquee, Oceanfire, Purple Rock Trip, Beau, and The Amazing Sounds of D. B. Turi. Except for Jay Tausig, who has appeared on numerous FdM releases, these bands are making their FdM debut. Of special note is Mademoiselle Marquee’s “Salvia,” which is an excellent piece heavily influenced by Ashra, and The Cream People’s outstanding blend of Harmonia, Neu!, and Ashra on “Will of the Cusp.”

This was a mammoth undertaking with many peaks and valleys, but though everything included here may not appeal to you, there is a ton of new and excellent music from many up and coming new artists and bands.