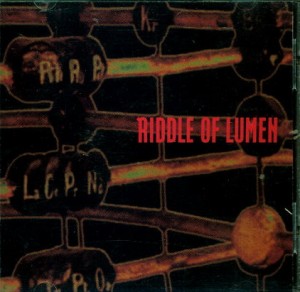 From the dark abrasive regions of cement and steel, where rock meets noise in an industrial apocalyptic nightmare, comes the first CD from the Japanese FMN Tape label... I suppose this means that they're not just a tape label anymore! Riddle of Lumen collects material by twelve of their artists, all part of the "Kansai rock scene" in Kyoto, a part of the new underground noise-rock movement. Featured artists include P.O.N. and Yoshide Otomo (both of whom contribute two tracks apiece), and also some lesser known artists like EQ, Drill Man, Romp, Bidziliba, U, Peregrini, Soap-Joh Henshi, O.A.D. and Solmania. Most of the bands here are essentially instrumental, with some occasional shouts / screams / spoken / distorted parts, and like all compilations there's quite a bit of variety. On one end you have bands like P.O.N. who may remind of the NY Downtown sound mixed with some RIO elements, and on the other you have Solmania, whose entry "Sift 84" is basically three and a half minutes of painful grinding distortion and metallic screeching. Most are somewhere in between, occupying a region of the rock spectrum that bands like YBO2 were beginning to define a decade ago. If this sounds interesting to you, then you'll probably like it. Otherwise keep the Excedrin handy.