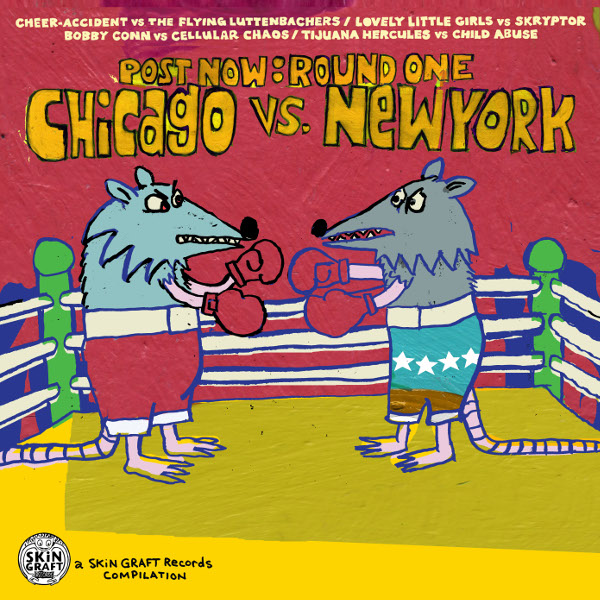 With a roster that includes such diverse artists and Cheer-Accident, Koenjihyakkei, Flying Luttenbachers, Space Streakings, Yowie, and many more, Skin Graft has become one of the most reliable homes for boundary-pushing music of many stripes. With Post Now: Round One - Chicago vs New York, Skin Graft presents a unique kind of compilation, one that features two new tracks by each of eight different artists. Half of the artists are based in Chicago and the other half in New York, so they’re paired up in a set of matchups that provide interesting contrasts. (In spite of all of the boxing metaphors, I’m not going to treat these pairings as real competitions, since I don’t think music needs to be competitive. Listeners are free to like both from each set.) The first bill pits Chicago’s Cheer-Accident against The Flying Luttenbachers, a dormant Chicago band recently reborn in New York. Cheer-Accident throws the first punch with “War Is a Warrior,” a great off-kilter rocker in true Cheer-Ax mode, and then feints with “Site,” a gentle melodic tune dating back to about 2000, though it was never recorded at the time. The Luttenbachers, of course, do not present anything that could be called gentle. Their decade of inactivity has diminished their wild assault not one bit, and the listener is in for two blasts of frenetic drums, noisy guitar, and insane sax. It’s great to hear this band back in action after so long, and with no sign of mellowing or diminished capacities. From here on out, we’re dealing with bands I’m unfamiliar with. Lovely Little Girls give us a pair of quirky, funky songs in praise of quality footwear and (I think) dental care, reminding me of a horn-heavy update to 80s art-pop like The Stick Men, 9353, Human Sexual Response, and other such oddballs. Skryptor serves up a dose of avant-metal which has been described as energetic Mahavishnu Orchestra crossed with Black Sabbath, which might not be too far off base. While some math-metal bands come off as self-congratulatory in their ability to navigate complex arrangements, Skryptor seems more organic, with a healthy dose of chaotic noise to go with their tricky rhythms. Back to Chicago for a complete change of pace, we get Bobby Conn, a glitzy techno-cabaret-pop performer steeped in underground clubs with a knack for catchy dance beats with a big fake-eyelashes wink at more serious art. “Man Crush” and “Sticky Nougat” are fun tracks not far off from Flight of the Conchords without the Kiwi accents. Cellular Chaos brings back the noise with an updated brand of classic No Wave, full of driving beats and dissonant guitars. “Gaslight” in particular is a great tune, sometimes reminding me of Penetration with Pauline Murray (anyone remember them?). Next up is Tijuana Hercules, a relatively new band featuring John Forbes of Mount Shasta. Their stock in trade is a gritty take on rootsy psychedelic blues, with bluesy guitar picking backed by all sorts of strangeness, a variation and development of the sound pioneered by Mojo Nixon and Skip Roper back in the 80s. Finishing off the set is Child Abuse, with frantic noise from the depths of the subconscious presented in two tracks that all told contain five songs. This music is not for those of delicate sensibility, with vocals either growling or pitch-shifted like The Residents, dissonant guitars, crashing rhythms, feedback, and atonal synthesizers. So who wins this battle of the bands? That’s easy — the listener, who gets a chance to sample the artists on one of North America’s most creative independent labels.