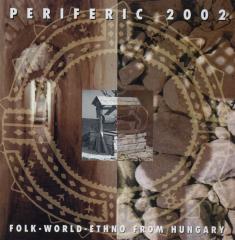 Concurrent with Periferic’s second space/prog rock compilation comes another collection of Hungarian folk/ethnic music. Whereas last time they featured many groups with a slightly modern bent, whose work clearly displayed a cognizance of popular music, this time around it is almost 100% back to the basics. Fourteen different groups/solo artists are included, the most well known being Marta Sebestyen, doing (ironically) an a capella “Greensleaves.” Ultamarin are the only other band to let non-Hungarian influences in; their upbeat modernized rock tune complete with guitars and drums is the odd man out on this disc. Much of the emotional density of what these groups bring alive bears an indescribable melancholy that I’ve never heard from any other European music. Basta Citerazenekar is an example, whose ancient sound haunts the listener, drowned in strings and male voice. Many of the bands opt for a brisk oom-pah oom-pah rhythmic backing while soloists go at it on violin or hammer dulcimer, invoking what is not too far removed from American bluegrass, or festive Irish reels. Bokros Ensemble, Dongo, Ivanovics Tunde, and Kerekes Egyuttes are indicative. Lastly there is a tendency on other tracks towards what seems like Italian street café music, with its operatic vocals and rollicking playfulness. They all use acoustic instruments, and heavily favor accordion, violin, and hurdy gurdy. It isn’t difficult to realize the intention here is for merry-making. Stylistically this CD is much more likely to appeal to your parents’ generation than to Exposé readers. Thus I would recommend the previous Periferic ethno/world music collection instead.